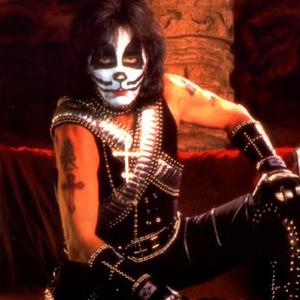 Peter Criss (real name: Peter Criscuola) was born December 20, 1945. He was one of four founding members of KISS. He was the drummer and singer of the band. Peter was the mellow side of KISS, singing hits like "Beth" and "Hard Luck Woman," but he also brought the fire into songs like "Black Diamond" and "Nothin' to Lose." Peter's first solo album came out in 1978 along with the other 3 member's solo albums.

The album was the least favorite of the four because it strayed away from the "KISS sound" and focus on the mellow sounds which Criss favored (Criss grew up listening to crooners like Tony Bennett, Frank Sinatra).

In 1979, KISS released "Dynasty." Criss's only contribution to the album was the track "Dirty Livin'" which featured him on lead vocals. KISS used a session drummer Anton Fig for the rest of the album.

He left KISS in 1980 because of drug and alcohol abuse and started a solo career. Even though Criss was featured on the "Unmasked" album cover, he did not play a single beat on the album. He was replaced by Eric Carr.

In 1995, Criss was asked to sing with KISS (Paul Stanley, Gene Simmons, Bruce Kulick and Eric Singer) at a KISS Convention which ignited a spark of the idea of a reunion of the 4 original members. He sang "Hard Luck Woman" and "Nothin' to Lose." Later on that year, Criss joined KISS and Ace Frehley for an acoustic session for MTV's Unplugged Series. He sang/played 4 songs, Beth, 2,000 Man, Nothin' to Lose and Rock and Roll All Night."

This was the "icing on the cake" because a year later, Criss, Frehley, Stanley and Simmons donned the war paint (which KISS hadn't worn since 1983) and put their larger than life boots back on for a Reunion Tour which was the biggest tour in the world at the time. Criss was ecstatic to play with KISS again.

Criss and the others released Psycho Circus in 1998. Like in the past, Criss and Frehley were credited on the album, but session drummers were used for most of the album. Criss sang the Beth-esque track "I Finally Found my Way" written by Paul Stanley.

Two years later, in 2000-2001, KISS announced their Farewell Tour which also became a huge tour. About 3/4 into the tour, Criss was becoming unhappy with his salary and he was also tired of playing two hour shows every night. On the night KISS played Trenton, New Jersey, Criss had a "tear" pasted on his face. Many people say this was a sign that Criss wasn't coming back because for the next show, KISS had to bring back Eric Singer, who put on the "Catman" make-up and finished the tour (since Simmons and Stanley owned the make-up designs, Criss couldn't stop them).

KISS was silent in 2002, but then in 2003, KISS planned a once in a life-time concert event with the Melbourne Symphony Orchestra and Criss was back behind the skins (some say they needed him to sing "Black Diamond" and "Beth" which were symphony worthy). Criss then stayed with KISS to play on the World Dominination Tour along side Aerosmith (since the set was 80 minutes, Criss had an easier time playing). After the tour, Criss called it quits again, but on good terms.

Let Me Rock You