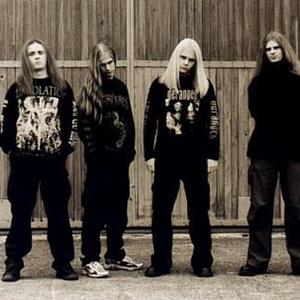 Decapitated is a technical death metal band from Poland. They formed in 1996 in Krosno in southern Poland, when all the members were still attending music school. They released their first demo Cemeterial Gardens in 1997 and their second demo, The Eye of Horus in 1998. After these releases, the band was considered as genuine contenders of the underground metal community, and eventually signed with Wicked World/Earache Records for the release of the debut album, Winds of Creation.

They released their first demo Cemeterial Gardens in 1997 and their second demo, The Eye of Horus in 1998. After these releases, the band was considered as genuine contenders of the underground metal community, and eventually signed with Wicked World/Earache Records for the release of the debut album, Winds of Creation.

With Vitek (1984-2007) and Vogg (being aged 23) they are one of the youngest bands in the genre to have had success. Martin and Vogg conjointly hold gigs with the Polish experimental symphonic/technical black metal band Lux Occulta.

Decapitated also toured the UK upon the release of Winds of Creation, and in light of a phenomenal response, the band was led to being voted "Best Newcomer" in Terrorizer Magazine's 2000 Reader's Poll, and a further European tour in 2001 with Immolation continued to contribute to the band's musical reputation.

Vogg recently stated that he is looking for a new line-up to keep the band alive.

Their 2004 album, The Negation, along with their latest effort Organic Hallucinosis both have a fuller, more classical death metal tone. In summer 2005, the band's vocalist Sauron quit the band. According to Sauron, the reason was due to "health complications". Sauron's replacement was Covan, a previous member of Atrophia Red Sun. The group is currently signed to Earache Records.

Organic Hallucinosis was released on the 13th of February 2006. Martin rejoined Decapitated after the army wanted him for conscription in Poland and nearly faced going to court despite the rumours of problems concerning the label, which were proven to be untrue.

On 29 October 2007, while travelling to a show in Gomel, Belarus, the band was involved in an automobile accident. Their tour bus collided with a truck carrying wood, injuring Vitek and Covan. While it was initially believed that they were taken to Moscow to be treated after treatment at a local hospital, it was later confirmed that they were only taken to be treated in Novozybkov.

Covan has since shown signs of improvement. The bus was said to be 'beyond repair' following the crash, an indication of the impact of the collision. On 2 November 2007, the band's drummer Witold "Vitek" Kie?tyka died in the hospital from head injuries sustained in the accident.

Recently, Waclaw "Vogg" Kieltyka joined Vader as a session guitarist since Decapitated is on hold and Vader former guitarist, Mauser, left the band

In March 2009, remaining member Vogg put out a message asking for drummers and vocalists around the world to send their audition tapes to him, and that after a long decision he was going to keep Decapitated alive.

On July 31st 2009 , Vogg announced on the Decapitated Myspace that 21 year old Kerim "Krimh" Lechner had been chosen as the bands new drummer. Rafal Piotrowski was chosen as Covan's replacement and Filip "Heinrich" Halucha (of Vesania fame) completed the 2009 Decapitated lineup on bass, leaving Vogg as the only original member.