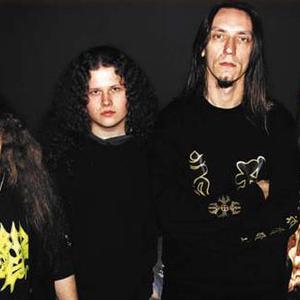 There is more than one artist with this name. 1) Dies Irae was formed in 1992 as very young death metal band featuring China (guitar), Mauser (guitar and vocals), Czarny (bass) and Gilan (drums). 1994 marked the recording of their demo titled "Fear of God", which was released by Serenades Records two years later. The demo comprised of typical death metal tracks and guitar variations as introductions. In 1997 Mauser joined the band Vader and Dies Irae split up.

1) Dies Irae was formed in 1992 as very young death metal band featuring China (guitar), Mauser (guitar and vocals), Czarny (bass) and Gilan (drums). 1994 marked the recording of their demo titled "Fear of God", which was released by Serenades Records two years later. The demo comprised of typical death metal tracks and guitar variations as introductions. In 1997 Mauser joined the band Vader and Dies Irae split up. Four years later Mauser signed a contract with Massive Management, whose artist roster consists of such bands as Vader, Sceptic, Decapitated and many others, and started looking for new members to his band. With help of Doc (Vader), Novy (Devilyn) and Hiro (Sceptic) the band prepared material for a full debut album.
On 5 June, 2000 Dies Irae entered the Selani Studio to record their debut album. Entitled Immolated, it was produced by Szymon Czech, and graphically designed by Jacek Wisniewski, who had been previously responsible for several of Vader's cover arts ("Kingdom," "Black to the Blind," " Live in Japan"). Immolated was mastered at Studio 333 by Bart?omiej Ku?niak who is responsible for Vader's masters. All lyrics are written by ?ukasz Szurmi?ski.
Following the promotional mailing of Immolated the band received a number of contract offers from such labels from Europe and the States. Finally, Dies Irae signed a four albums contract with world label Metal Blade Records, which represents the band everywhere in the world except Poland and Japan. In Poland they are under Metal Mind flag, in Japan they are representated by Avalon/Marquee Inc. Both labels also manage Vader. The debut album was released in November of 2000 and its promo campaign was backed up with a video-clip for the track "Lion of Knowledge ". The album itself comprises 9 cuts, including two cyber-industrial intros performed by Doc. Dies Irae are also prepared for their first European tour with Nile in January of 2001.
On April/May 2002 the band entered Hertz Studio to record their second full length album "The Sin War". The date of release got re-scheduled to September, because of technical problems with the CD-Masters. The album contains more complex and diverse songs, with huge impact of all band's members into the final result, especially excellent ideas of Jacek Hiro. The band was forced to postpone the autumn tour due to Vader's obligations.
On July, 2003 Dies Irae for the first time appeared on the stage. During the "Empire Invasion Tour 2004" they played alongside bands like Hate, Lost Soul and Esqarial. The deal with Metal Blade was terminated and shortly after the band signed a new deal with MMP, including new album and DVD releases. The third and latest effort "Sculpture of Stone" was recorded at Hertz Studio and includes 9 songs. The album was released in Poland on 19th of May in 2004 and the band hit the road again, playing 9 gigs along with bands like Trauma, Sceptic, Shadows Land. Vitek from Decapitated replaced Doc, due to his hand injury. Japanese, European and US releases of "Sculpture of Stone" has been fixed on Autumn 2004. At the beginning of 2005 at TV Studio Dies Irae shot a gig for the forthcoming DVD release and in February they hit the road along with bands like Decapitated, Hate and Crionics within the confines of "The Ultimate Domination Tour 2005".
All members of the reconstituted Dies Irae continue to perform with other groups. Novy and Mauser is a member of Vader, while Hiro is a member of Sceptic.

2) Dies Irae were a heavy progressive krautrock group from Saarbr?cken (Germany), active from 1968 to 1972, they recorded only one album 'First' (1971) for Pilz before the label fell into the hands of Rolf-Ulrich Kaiser. Dominated by blues, 'First' is a heavy progressive effort owing much to the heavy blues sound and occult nature of Black Sabbath's debut album. Song titles such as 'Lucifer', 'Harmagedon Dragonlove', and 'Witches Meeting' display the groups interest in the dark side. The standout track for krautrock fans is sure to be the seven-minute freak out 'Trip'. A spacey track, 'Trip' begins with an outstanding electronic collage which gives way to a peaceful free flowing jam containing acid-drenched celestial vocals. Fans of the heavy progressive sound will find 'Lucifer' and 'Witches Meeting' to be the best cuts. 'Lucifer' contains an ultra aggressive guitar and harmonica riff slightly reminiscent of 'The Wizard' from 'Black Sabbath'. 'Witches Meeting', an extended track encompassing numerous musical sections, contains a rocking guitar solo and a furious ending. As a whole, the album is sure to please most fans with its heavy nature.

4) Dies Irae was born in November 1995, as a Bucharest metal group. They recorded the first demo (containing 2 songs) in 1996 and set out to promote it on television and radio. Four years of intense live activity followed. The band recorded two official releases, an EP in 1996 and an LP in 1998.
The year 2000 saw the release of a new Dies Irae EP, Warganism, and the first Dies Irae video, for the song with the same name. This year also saw the band split up, as Victor Stoica went to the United States to complete his studies. In 2001, Dies Irae started a side project, PHOBIA, a project that lasts to this day.
In 2005, Victor Stoica returned to Romania and the band recorded a new single, Shadow Boxing, to be released in 2006, along with a new video.
In 2006 Dies Irae has started an intense internet promotion campaign and also allied themselves with Khaeotica Productions, a German promotion company, in their effort to go international.

5) Dies Irae was an obscure black metal influenced by classical music. This band released one very obscure demo entitled "Circle of Leth" to a few people and very shortly after was put to rest. Formed in 1994.