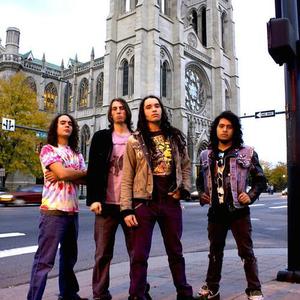 There are at least four artists called Havok: (1) an American thrash metal band ; (2) a German death metal band; (3) a Swedish extreme metal band; and (4) an underground rapper. 1) Havok Formed in February of 2004: HAVOK is the thrash metal powerhouse reigning from Colorado that continues to win over thousands of fans from various parts of the world. Incorporating blisteringly fast guitar riffs, machine-like drumming, groovy bass lines, searing leads, and hard-hitting vocals, HAVOK is able to maintain that *punch-you-in-the-throat* style of music.

1) Havok Formed in February of 2004: HAVOK is the thrash metal powerhouse reigning from Colorado that continues to win over thousands of fans from various parts of the world. Incorporating blisteringly fast guitar riffs, machine-like drumming, groovy bass lines, searing leads, and hard-hitting vocals, HAVOK is able to maintain that *punch-you-in-the-throat* style of music. Although there are many other thrash bands out there, there is one thing that sets HAVOK apart from the others. This band puts their own stamp on the genre by employing a more technical side of music, while maintaining the feel. HAVOK's live show is where the band really catches peoples' attention, with their non-stop energy level and their ability to get the audience involved. They are a must-see for any fan of live music! This Denver outfit has had their name compared to the likes of Metallica, Megadeth, Slayer, Anthrax, Pantera, Testament, Overkill, Exodus, Suicidal Tendencies, Motorhead, etc? And for good reason! They possess a distinct approach to thrash: one that emulates the abrasive styles of classic 80s thrash metal, but with a much-needed fresh edge. HAVOK has received tons of positive feedback for their efforts to make thrash a mainstay in modern music: and they will continue to spread the intensity until they decide the job is done! Given their talent, determination, and constantly growing fan base, HAVOK is destined to become a mainstay in this scene!

To date havok has released the demo Thrash Can, the demo Murder By Metal, and the ep Pwn 'Em All. Their first full length album 'Burn' was released in 2009 and their sophomore effort, Time is Up, was released in February of 2011.
Please visit http://www.myspace.com/havok for more details.
Also visit their ReverbNation site at http://www.reverbnation.com/havok and the Candlelight website at candlelightrecordsusa.com
Or watch live videos at http://youtube.com/user/havokcoloradothrash

2) Havok is a German death metal band from Blaubeuren (20km west of Ulm).
They released one EP called "Havok" and also have a demo called "Unleashed Demo". They were influenced by bands like Six Feet Under, Fleshcrawl, In Flames, Slayer and As I Lay Dying and already supported bands like Final Breath or Disbelief. You can listen to samples at either their homepage or their Myspace site.
Starting March 2010, Amazon.de will offer their 11-track album Rebuilding Sodom as mp3-download, naming the band as "Havok (GER)" to avoid confusion.

3) HAVOK is a Swedish extreme metal act from Lund signed to ViciSolum Productions. They released their first demo "Realms of Reverie" in 2006, the single "World Shroud" in 2007 and "Apathy Esplanade" in 2008. ("World Shroud" was among other things featured as "best demo release in Scandinavia 2007" by Close-Up Magazine.) In the beginning of 2009 they released their debut album "Being And Nothingness". Havok began in the year of 2003, when guitarists Mahan Ahmadi and Miguel Cabrera founded the technical thrash/death metal outfit Ecliptica, in the southern swedish city of Lund. With a loosely knit formation, they recorded a couple of songs. During the winter of 2004, they were on the hunt for a new drummer, and conveniently found Johan Cronqvist, who had recently immigrated from the town of Halmstad. With him came the change of band name, turning the music towards a more brutal, chaotic death metal sound, yet still with remnants from the thrash days. Trying out various musicians to fill the void behind microphone and bass, the summer of 2005 brought the vocalist Johan Bergstr?m. Some months later, as winter approached, Andreas Johansson joined the band, filling the last gap in the line-up with his bass.

As time progressed, the songwriting continued to evolve, leaving older songs behind, sharpening their composing skills, and a few live performances in Lund took place. In July 2006, this constellation entered a studio for the first time (Flatpig, in Malm?), recording their four tracked debut demo, ?Realms of Reverie?. Despite a generally positive respone to the demo, Havok were not overly satisfied with how the sound turned out, moving on composing the follow-up single, entitled ?World Shroud?. It was recorded at the end of 2006 at the Blacklodge Studio in ?-rkelljunga, and was released in early February 2007. The new recording received great acclaim, among others the title "Best of Sweden" in Close-Up Magazine in April -07, sending us to perform at the Peace&Love Festival in Borl?nge (the fastest growing music festival in Sweden). Several other shows where played in Lund and Malm? throughout the year.

In August, Miguel Cabrera announced he was about to leave the band, for personal reasons, and in mid-September he did. Havok went on without him to record the EP "Apathy Esplanade" in the autumn and was released in early February 2008. Simon Dahlberg joined up as a new second guitarist. A year later, they released their debut album "Being And Nothingness".

The Swedish Havok's is also the one to release nearly all of their recorded material to the public on Last.fm.

4) Havok is an underground rapper, and member of BdG.

Point Of No Return (EP)