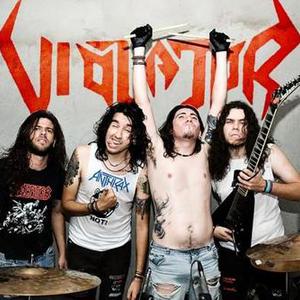 Violator was formed in early 2002 by a group of friends keen on playing the old thrash metal, and it has always been like this. Four thrash maniacs - Pedro ?Poney Ret? (vc/bs), Pedro Capa?a (gt), M?rcio ?Cambito? (gt) and David Araya (dr) - crazy about Vio-lence, Whiplash and Exodus that breath the spirit and the ways of old school metal. After a live rehearsal demo (Killer Instinct - 2002), two underground compilations (Metalvox ? 1 e Fast Food Thrash Metal both from 2003) and plenty of gigs in all the dirty holes...

After a live rehearsal demo (Killer Instinct - 2002), two underground compilations (Metalvox ? 1 e Fast Food Thrash Metal both from 2003) and plenty of gigs in all the dirty holes, from Distrito Federal and neighborhoods, Violator got the opportunity to travel to Asuncion and play in the Paraguayan lands. Among that, the band was invited as an opening act for the thrash metal legend, Destruction, and American deathbangers, Malevolent Creation.

In the first months of 2004, the band got in touch with Kill Again Records label through Metal Bloods Editor, Ant?nio Rolld?o. After this union, what was supposed to be a second demo turned into the EP, Violent Mosh. Four songs of intense old school thrash metal, no open for modernity.

The strong label work, together with a hunger for playing live, resulted in over 40 gigs in the next two years. Violator traveled through 10 estates and had the honor to meet thrashers from all over Brazil. The tour for ending the EP promo, Moshing With Violence Tour 2005, took the band across Brazil's north-east and allowed the band to play in the middle of the Amazon Rainforest, in the city of Portel, after facing 20 hours of boat rides.

One of these thrash gigs was recorded for the fist edition of Da Tribo Rock Magazine. It came to stores in all countries, with a DVD that captures Violator's performance in Campinas/SP. Violent Mosh was also the first release from the band outside of Brazil. In a K7 tape version, just like the old 80s bands, the EP was released in Bolivia by Grim Art Productions. This copy was limited edition, with only 666 copies available.

The EP was above all expectations, which lead to another release. This time as a split with one of the greatest Brazilian thrash bands, Bywar. From the union of Violent Mosh and Invincible War, first album from the S?o Paulo headthrashers, Violent War was born. This brought a Violator special bonus, a version for Taurus Massacre, a historical band from Brazil.

In late 2005, the band got the worst news of all time. Their guitar player, friend and brother, Juan Leda, left the band to continue his studies in Argentina, where his family lives. The farewell show was with Filandian thrashcore band Maniacs of For?a Macabra, a gig to remember, with underground spirit and United Forces. Those were feelings that the band always believed.

With Juan out of the band, it did not deter the will of doing thrash, living thrash and breathing thrash. Violator started the beginning of 2006 as a power trio. After six months locked up at Orbis studio in Bras?lia, the band comes up with the first full-length, Chemical Assault. The album release, in october of the same year, is also the return of the group with two guitars. M?rcio Cambito joins the band and brings even more speed to the picks and insanity to the live perfomance. violator are stronger than ever. The violation has just begun!

The Hidden Face Of Death

Thrashing The Tyrants (Split With Bandanos)