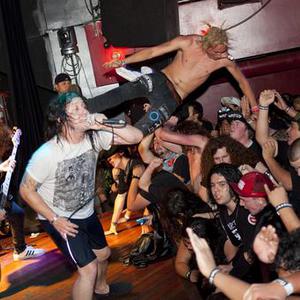 Municipal Waste is a crossover thrash band from Richmond, Virginia formed in 2001. They are known for their loud, drunken, party atmosphere and rowdy show attendees, and also for their humorous thrash oriented parody song titles. Occasionally, they have been known to play unscheduled shows late at night. Municipal Waste are a crucial element of Richmond culture, and have four albums under their bullet belts, including 2012's The Fatal Feast.

Playing at This Is For You Fest '05 in Daytona Beach and at Super Sabado Gigante Fest 2 in January 2006 CA, they continued to gain national acclaim in the metal scene. They have toured Australia and Europe.

They had a successful 2006 US tour in support of Gwar. Staying on the road for a while, they then toured the US with Destruction in early 2007.

In 2008 they played at Download on the Tuborg stage on the Sunday in a half hour slot which was regarded as one of the best performances from any band over the weekend.

They played at 2009's Reading Festival, on the Lock Up stage.

The Art Of Partying