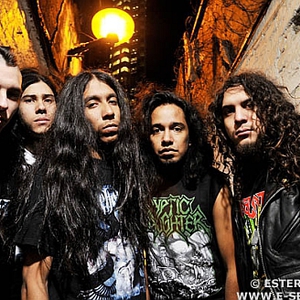 Rising out of Pomona, in the Los Angeles, CA outer suburbs, Bonded by Blood have rapidly emerged as one of the youngest (average age just 18) and arguably one of most proficient of the new thrash wave of acts pouring out of that city in recent times. Formed in the summer of 2005 by a 17 year old hardcore-punk-thrash driven vocalist (Aladdin), he soon teamed up with like-minded young guitar shredders (Alex Lee and Juan Juarez)...

Although partly influenced by different styles of music, they all met through a love of one genre: THRASH METAL.

The band's prowess was noticed when they won first place in the TNT productions battle of the bands at Riverside, which included over 250 bands. That was no mean feat in a notoriously competitive LA scene- but as a young band starting at the bottom of the food chain, Bonded By Blood knew a solid practice regime was required to hone their razor sharp riffs with one single purpose- to become a respected LA thrash metal band

Two decades on from the origination of the genre, the Big Four have since become part of the regular metal mainstream, leaving legions of fans starved of the old-school thrash vibes. Bonded By Blood aim to change all that - and hence lead the pack of bands playing old-school thrash but with an added energy, fun and youthful vigor, with a modern twist all of their own making. Bonded By Blood are no mere 80s rehash.

After playing a countless number of shows in a short amount of time, BBB began to gather genuine momentum, rapidly amassing a rabid LA fan base, helping the band to play their part in putting the LA New Thrash Wave on the map as undoubtedly one of the most exciting, fast-rising scenes currently in metal. Word spread, and they soon shared the stage with Testament, Flotsam and Jetsam, Sadus, and recently got to play main support to their heroes - Exodus.

Recording-wise, 2006 saw the release of their first demo, 'Four Pints of Blood,' which finally showed what Bonded by Blood was all about. BBB got attention from many more fans after promoting that release. August 2007 saw BBB's 'Extinguish the Weak' self-released EP hit the web and the streets, resulting in instant acclaim from the awaiting hordes of thrash fanatics, and label interest was swift to follow, as the spotlight had by then begun to shine on the burgeoning LA Thrash scene.

Weeks before the EP was released however, Bonded by Blood had received an offer from the label which is doing the most to put the new thrash wave of acts on the global map: Earache Records. So, naturally, in September of 2007, Bonded by Blood and Earache inked for a long-term worldwide recording deal.