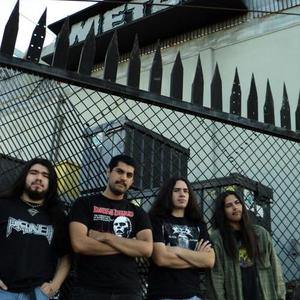 The beginnings of Exmortus can be traced back to a dusty garage in a southeast suburb of LA in early 2002. Formed by Jadran (lead guitar) and Mario (drums), two cousins with a passion for true heavy metal and thrash, Exmortus quickly took shape and began playing their first shows that same year. With influences ranging from Iron Maiden, Judas Priest and Slayer, Exmortus immediately stood out amongst the local Whittier, CA scene, which consisted mostly of nu-metal and metalcore bands.

Being the only local teenage band playing old school metal posed its challenges but the band's focus on guitar-oriented heavy metal, the likes of which had not been seen in LA for many years, could not go ignored.

Legions Of The Undead

The Sound Of Steel (Japan)

Slave To The Sword

Beyond The Fall Of Time