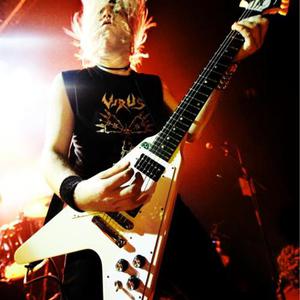 blackened thrash metal group TOXIC HOLOCAUST mutated into existence in 1999 in Portland, OR, when Joel Grind merged his love for classic punk and metal and the flash of L.A. hard rock into his ideal band. Like his influences - Bathory, Venom, Onslaught, English Dogs, Possessed, Broken Bones - TOXIC HOLOCAUST featured blazing riffs, gravel-throated vocals, and a deadly fixation on the evil in man and a post-apocalyptic world.

Grind wrapped all of these elements up with a DIY attitude and begin writing and recording material almost instantly. The band's sound mixes metal subgenres crossover thrash with first wave black metal.

As the band's driving force, Grind wrote and recorded all of the material. After several well-received demos, Grind was ready to take the band to the next level and, in 2003, began recording what would become TOXIC HOLOCAUST's debut full-length Evil Never Dies.

Evil Never Dies was released in the fall of '03 and was followed up with a number of TOXIC HOLOCAUST tours. A string of vinyl-only EP's and split releases followed. Upon returning home, Grind quickly began writing the follow-up to Evil Never Dies, using a much more primitive approach emphasizing his punk rock roots.

This second full-length, Hell on Earth, was self-recorded once again ? this time to an 8-track reel to reel - in Grind's spare bedroom in early 2005. Hell On Earth was released in fall 2005, almost two years to the day Evil Never Dies was released, and was adorned by original artwork from classic metal artist, Ed Repka.

TOXIC HOLOCAUST toured through the end of 2005 and for much of 2006. Grind's determination and never-say-die attitude lead to tours of the US, Japan, Australia, Europe, Canada, and even Brazil. These self-booked and self-financed tours proved that Grind's independent spirit raged just as hard his music.

TOXIC HOLOCAUST continued touring in support of Hell on Earth well into 2007 with the likes of MUNICIPAL WASTE, 3 INCHES OF BLOOD, SKELETONWITCH and many more. Any off-time was used to write new material. A number of new songs were demoed and began circulating, prompting several labels to get in touch with the band. This new demo made its way around the Relapse offices, where the band chose to call home in early '08.

An Overdose Of Death?is an unstoppable juggernaut of infectious riffs, punk attitude and unforgettable anthems that could be the soundtrack to civil unrest in a post-apocalyptic world gone mad. ?Gravelord?, ?Wild Dogs?, ?Future Shock?, ?War Game?, ?Nuke the Cross?, ?War is Hell?, and the list of incredible songs goes on. An Overdose Of Death?will see its international release this September.

In anticipation of the new release, TOXIC HOLOCAUST has already begun touring in support of An Overdose Of Death?.The band is currently out on the North American AT THE GATES reunion tour along with DARKEST HOUR and MUNICIPAL WASTE. TOXIC HOLOCAUST will then follow-up the AT THE GATES tour with an appearance at the Hole In The Sky Festival in Norway and a Fall tour with OVERKILL.

From the Ashes of Nuclear Destruction

An Overdose Of Death