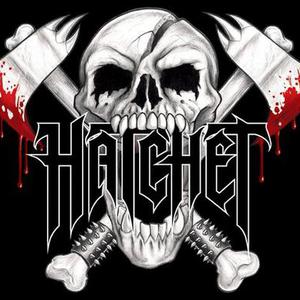 Hailing forth from the Demise of a two year long Melodic Death Metal project that was in a stand still, the idea of Hatchet was born amongst numerous band rehearsals in which other band members were showing up less frequently. Getting restless of the never ending hurry up and wait game that seemed to plague the Melodic death act, Its two serious members decided to go back to their roots....Classic Thrash.

As the break-up of the other project was final, Dave(drums) and Julz(lead guitar) were able to focus on writing new material. Within a couple of weeks 3 solid songs were laid out and more were spewing from the duo and it was apparent that this was a serious band and more members were needed. After going through numerous auditions and 2 temporary members A dedicated guitarist (Sterling) took the permanent role of Rhythm guitarist. As auditions of vocalists still continued, a unique individual walked in and belted out the classic Testament song "Into The Pit" with the band. With the voice they had been searching for (Marcus) completed the lineup.

Dawn Of The End

Mind of a Superstar