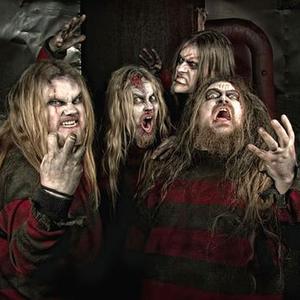 The Masters of Horror Metal are back for the 3rd attack! The moshing beast we know as F.K.?., short for Freddy Krueger's ?nderwear, first raised its ugly head back in 1987. In those days they were more or less pure S.O.D. die hard disciples, to say the least, and after a handful of something that was supposed to be rehearsals but more bared the resemblance of cheap beer and pizza fights, the band fell into a hiatus.

It wasn't until confronted with a strange guy called Larry in early 1997 that the band considered bringing the slumbering beast back to life again. After the overwhelming response of the 20-song demo "Beware of the Evil ?nderwear" recorded in 1998, the guys decided to put some more effort in. Come 1999 and the horror metal men spend nine days in Dugout Studios with engineer Daniel Bergstrand to lay down the classic tracks that would come to complete their moshing magnum opus "Metal Moshing Mad". Released on Pat's own label, Head Mechanic Records, the 22-track mosher showed the world that it's still possible to have good, friendly, violent fun and create music that makes you diving to get to the nearest mosh pit! After the release and some successful festival gigs at Dist and 2000 Decibel, as well as a lot of unforgettable club gigs together with bands like The Haunted, Entombed and Meshuggah, among others, the band slowed down the pace as the members also paid their dues in other metal acts, taking up more and more of their precious moshing time.

In 2004, Larry, Pete, Pat and Ted realized that what the world really needed was another dose of their patented Horror Metal Mosh, and so began the making of their sophomore moshing masterpiece "Sometimes They Come Back... To Mosh" (Head Mechanic Records). Once again inspired by 80's thrash and horror movies and of course, old issues of Metal Forces and cheap beer, "Sometimes They Come Back... To Mosh" thrashed and slashed its way into the metal fans veins and once they tasted this hot dish of destruction... they ended up begging for more! Their unholy return led to some great tours including the now legendary "Weapons of Mosh Destruction" tour in the US together with Ghoul and Engorged and a short but intense visit to Italy with Hyades.

And now, due to massive demand from all the dedicated moshoholics around the globe, it's time for the mighty Horror Metal Moshing Machine's third, most furious and outrageous effort to date. Recorded in the boiler room of Ted's own Blueflame Productions studio and mixed by Larry in his Great Scot! Audio studio, this is the release that's going to set a new standard for horror and metal for decades to come. You will be taken on a trip on the "Highway to Horror", feel a "Twitch of The Thrash Nerve" and ending up "Where Moshers Dwell". This is prime neck-breaking, horror-inspired, sing-along thrash madness! And, to make it even more accessible and to be able to fully concentrate on the thrashing action, they have decided to let the newly started label Metal-on-Metal handle the worldwide release.

So, once again, dear moshoholics, it's time to unite and mosh as one!

Sometimes They Come Back... To Mosh