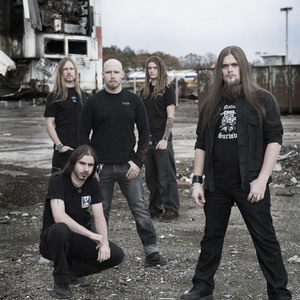 IMPIOUS was formed in 1994 by Valle Adzic and Martin ?kesson. Later that year Robin S?rqvist joined the band. After releasing two demos with session drummers, IMPIOUS finally found Ulf Johansson, their first permanent drummer. The band recorded another demo in 1997 which resulted in a deal with Black Sun Records. The band released two albums on Black Sun and did a short tour of Holland and Belgium.

A couple of years later the contract was fulfilled and the band signed a deal with Dutch label Hammerheart Records. With a new line-up consisting of Mikael Nor?n (drums), Erik Peterson (bass), Valle Adzic (guitars), Robin S?rqvist (guitars) and Martin ?kesson (vocals), IMPIOUS recorded and released the album ?The Killer? and the MCD ?The Deathsquad? on Hammerheart. That's when things started to happen for real. IMPIOUS toured Europe with NECROPHOBIC and SATARIEL and proved to be an extremely powerful live act. One of the shows basically led to a contract offer from Metal Blade Records.

Damn right, IMPIOUS signed with Metal Blade and released the album ?Hellucinate? in 2004 which lead to two European tours with AMON AMARTH, several festival appearances in Europe and Japan, and one Japanese tour with THE BLACK DAHLIA MURDER.

In the autumn of 2006 the band recorded ?Holy Murder Masquerade? at Studio Deadline, which is owned by band member Valle Adzic. The band did several shows in 2007 and a few festival gigs at i.e. Summer Breeze Festival and Stonehenge Festival. The band also did their first american show at the New England Hardcore And Metal Festival with bands such as Cannibal Corpse, Behemoth, Dimmu Borgir, Unearth, The Black Dahlia Murder etc. A live DVD was also filmed on location and is now released as a part of Metal Blade Records 25th Anniversary DVD.

The next assault from Impious is planned to be recorded in the summer of 2008 and you better keep an eye out for this one, because it will most certainly be most brutal album they've ever put out!!!