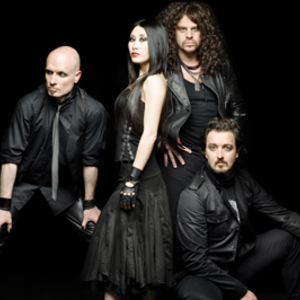 Krypteria is a gothic metal/power metal band from Germany. Founded in 2001, the band is now headed by Korean-German singer Ji-In Cho. In the beginning, the idea was to use different vocalists, though, Ji-in took this place in 2004. They have released four studio albums and one EP, the latest one being All Beauty Must Die in 2011. They started in 2001 when Chris Siemons, Frank Stumvoll and S.C. Kuschnerus wanted to do a fantasy-musical CD.

They started in 2001 when Chris Siemons, Frank Stumvoll and S.C. Kuschnerus wanted to do a fantasy-musical CD. There was no singer at this time, because they wanted to record the CD with many different vocalists. In 2003 their debut album Krypteria was released. One year after, a big flood was in India and the German TV station RTL asked them to take Liberatio as a benefit single. They decided to take Ji-In to as the singer of the band. In 2005 their second album In Medias Res was released. Before joining Krypteria, Ji-In had participated in the auditions a TV talent show "Popstars" to be a member of No Angels, but she was eliminated. There was a big hype in Korea, Republic of about their second album and their song Victoriam Speramus became number 1 hit there.

The next recording was an EP - Evolution Principle was released in 2006.

On January 19, 2007, Krypteria released their third and latest studio album, the first one with a title in English, Bloodangel's Cry. It is titled after one of the tracks, The Night All Angels Cry. Bloodangel's Cry is so far the band's most successful work. In early 2008, the band announced that they were working on their third studio album My Fatal Kiss, which they released as follows:

In Spring/Summer 2010 they will released it in the rest of the world. On their official Twitter page, they announced that their next album would be called All Beauty Must Die and would be released on April 22, 2011

All Beauty Must Die