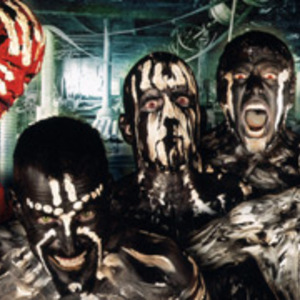 Motograter is an American nu metal band. They are best known for their homemade instrument the "motograter" - designed with industrial cable and guitar pieces that creates a very deep bass sound. The "motograter" instrument originally took place of the original bass guitar but now accompanies it. The band is also known for painting themselves in a tribal style body paint for concerts. Motograter was founded in San Antonio, Texas in 1995 by Bruce "Grater" Butler playing the Motograter, Joey "Smur" Krzywonski on percussion, Chris "Crispy" Binns on drums, and Zak "The Waz" Ward on vocals.

Motograter was founded in San Antonio, Texas in 1995 by Bruce "Grater" Butler playing the Motograter, Joey "Smur" Krzywonski on percussion, Chris "Crispy" Binns on drums, and Zak "The Waz" Ward on vocals.

In 2000 during the recording of their first album, Indy, they added Eric Gonzales who handled electronics and samples.In 2001 they added guitarist Neil Godfrey. 2002 saw the departure of Godfrey, Gonzales, and Zak. They found a new guitarist in Matt "Nuke" Nunes, and a new vocalist in Ivan "Ghost" Moody.

In 2003 they released their first major label album entitled Motograter. It was the first Album to feature real guitars instead of samples. Before the album was even released, they added second guitarist JR, and Zak re-joined the band handling electronics/samples and also providing back-up vocals, making the band a 7-piece.That summer, Nuke left the band and they remained a 6-piece for a little while but eventually replaced Nuke with Ty Fury.

In the summer of 2004 Ty Fury would be replaced with Aaron aka "A-Bomb", and the band announced that they had begun work on a new album. Later on, Zak would leave the band again. The band chose not to replace him.

In the fall of 2004, the band toured without Bruce and Smur, leaving drummer Crispy as the only constant original member. In place of using the Motograter, they were accompanied by bassist Johnny Nailz. It was emphasized that this line-up was only for this tour but it was unclear whether or not Smur and Bruce had left for good or not.

In 2005 Motograter announced their hiatus to give time for side projects. However, the band played a one time re-union show in 2006 at the Delicious Rox Festival in which Ivan made it perfectly clear to fans and band members alike that he was finished with Motograter. Nuke and JR returned on guitar, along with Bruce on the Motograter with Crispy rounding out the rest of the lineup. After this show it was unclear what the rest of the members would choose to do.

The lineup played one show in Las Vegas, NV under the name "Out Of Curiosity" to test the new material on a live unbiased crowd before deciding to adopt the Motograter name. The set did not feature the Motograter.Before any touring commenced Bruce left and was replaced with Mark Nosler, leaving Motograter with no original/consistent members.

The "New Breed" sound is more in the direction of extreme metal and away from the tribal/aggro-rock of the original Motograter. The band's current demos do include electronics, however do not feature percussion which was an integral part of the original Motograter sound. The use of a traditional bass also adds a different feel, giving the band an even more full low end sound.