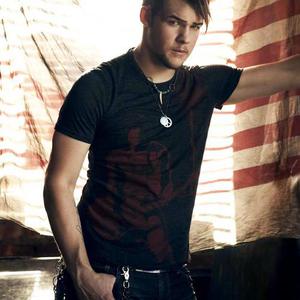 James Durbin (born January 6, 1989) is an American singer from Santa Cruz, California. Durbin was a Top 4 finalist on the tenth season of American Idol. He was eliminated on Thursday, May 12th, 2011. The Love Me Bad Songfacts reports that his pitch-perfect voice and hard rocker's attitude made him one of the most popular contestants of the series. After finishing fourth, he signed to Wind-Up Records (Evanescence, Seether). Love Me Bad, Durbin's first single released from his debut solo album, Memories of a Beautiful Disaster, was released online on October 19, 2011.

Durbin was born to Judy Settle-Durbin. His father Willy Durbin, a musician, died of drug overdose when he was 9. He was diagnosed with Tourette's and Asperger's syndrome shortly after his father died. He has facial tics, some social awkwardness, and restricted interests.
He has a fianc?e, Heidi whom he met in a bar and considered his 'rock'. They have a son together named Hunter.
In 2006, he performed in Santa Cruz-based children's theater group called Kids on Broadway and played the lead role in "Beauty and the Beast" and "Singin' in the Rain", as well as "West Side Story" in a production by All About Theatre, a Santa Cruz community theatre company. He was also the lead singer in a metal band called The Hollywood Scars. He said he has also done country music before.

Two years ago, James was invited to record and mix his amazing vocal talent with legendary producer/engineer/artist Alan Parsons (of The Alan Parsons Project/Beatles/Pink Floyd fame). Along with professional vocalist PJ Olsson, the group recorded James' vocals on Alan Parsons' song "We Play The Game," a collaboration with The Crystal Method.

Then only 19, James' drive, power, and musical insight were all too evident as he and Alan worked on recording a lead vocal and backing vocals on the Alan Parsons track from A Valid Path.

Memories Of A Beautiful Disaster