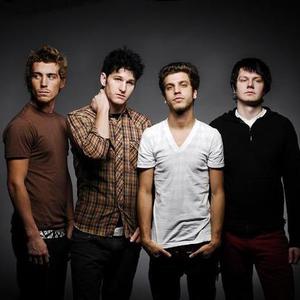 Ice Nine Kills, The band, named after the ultimate weapon of mass destruction from the Vonnegut novel, Cats Cradle -will, like its namesake, awe you. On their newly released album, Safe Is Just A Shadow, the group seamlessly weaves soaring melodies with the raw emotion and aggression of post hardcore and metal, creating in the process a refreshing sound that both soothes and knocks-over the listener. The band utilizes multi textured guitar hooks, a dual vocal attack, and a pummeling rhythm section which takes the listener by the throat, and refuses to let go

NK's relentless touring schedule, combined with intelligent guerilla marketing tactics, helped their last EP, The Burning, pass the 30,000 CD's sold mark . This was no easy task, especially without national distribution. When the band was not pouring their hearts into intense live performances, one of which resulted in a broken heel, they would be at malls, skate parks, other shows and festivals, spreading their manically infectious music with ipods and headphones. "The past 2 years we really tried to make every second count with this band," said Spencer. "In a day and age when alot of bands might chill backstage instead of meeting their fans, kids found it really refreshing that we were out there on the streets and in the parking lots, pushing something that we really believe in."

Their Hard work is definitely starting to pay off, and this is becoming apparent at their live shows, "It's always an amazing feeling to show up in a place you have never played before like Dallas TX, or Orlando FL, and have kids scream your lyrics back to you. We were absolutely blown away by the reaction we had on the kids at Warped Tour the past two summers. I know we definitely turned a lot of heads. We are even starting to see kids with our lyrics and album art tattooed on their bodies, it's absolutely mind boggling. It makes the ten hour night drives, sleeping on floors, and other hardships of being in a touring band all worthwhile," Spencer said in a recent interview.

With Revolver Magazine's stamp of approval (a band you need to know- December 2010 issue), a fanatical online following (consistently landing them in the top 10 on both the Myspace and PureVolume charts), and 2 years of highly acclaimed performances on the Vans Warped Tour under their belt, Ice Nine Kills is looking to do some serious damage in 2011.

The Silver Scream 2: Welcome To Horrorwood

I Heard They Kill Live

Safe Is Just A Shadow (Re-Shadowed And Re-Recorded)

Every Trick in the Book

The Predator Becomes The Prey