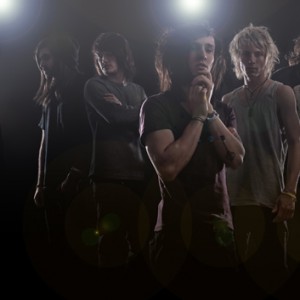 The Word Alive is an American metalcore band from Phoenix, Arizona, formed in 2008, the band is currently signed to Fearless Records. Their 2009 label debut, Empire reached position 15 on the Top Heatseekers, meeting a great amount of positive acclaim upon its release in 2009. The following year, the group recorded and released their debut full-length album, Deceiver on August 31, 2010, which reached 97 on the Billboard 200 and 15 on Independent Albums.

The Word Alive was founded in 2008 by Craig Mabbitt (lead vocals) with Zack Hansen (lead guitar) and Tony Pizzuti (rhythm guitar) who were former members of the bands Calling of Syrens and Clouds Take Shape. As a side-project of Mabbitt during his part in Escape the Fate, the remaining required members he recruited to start The Word Alive were chosen to be Nick Urlacher (bass), Dusty Riach (keyboard) and Tony Aguilera (drums). The group recorded songs with the intention of releasing them as a self-titled EP, despite that it never surfaced. Later on, the band forced Mabbitt to leave due to their dissatisfaction with Escape the Fate's schedules, which required Mabbitt to work as a full-time member.

The day after, Mabbitt posted a blog to his fans via his Myspace account explaining that leaving the band was not his decision and that "[The Word Alive] pretty much replaced me while I was on the road due to the fact that they wanted to tour and couldn't until I was available, I started that band with those guys and I'm very hurt at how they replaced me while I was touring...it's bullshit." On December 3, the band officially announced that Tyler "Telle" Smith, who was formerly one of the vocalists for In Fear and Faith and bassist for Greeley Estates, joined The Word Alive as their new frontman.

Feeling somewhat stagnant in their progression beforehand, the addition of Smith catapulted the band's ambitions to the forefront. With this initiation, their goals and aspirations were much more a reality, and they set to work on what would become their record label debut, Empire.
During March 2009, the band were taken in with a contract by a new label, later on during the 26th of that month the group officially confirmed that the label they were then signed to was Fearless Records. Smith stated "We hope to just keep touring, touring, touring... we couldn't be happier or more appreciative to be on tour right now, I think despite having some of the worst luck in the early beginnings of being a touring band yet never missing a show, we always have a positive attitude and that will make us a stronger band." The band set out to create an EP to be released through the label wherein it was titled Empire and was recorded with producer Andrew Wade in Ocala, Florida. It was released on July 21, 2009 where it reached #15 on the Billboard Heatseeker chart.

During February the band reached an agreement to leave founding drummer, Tony Aguilera out of the group. Both parties (Aguilera and the rest of the band) shared their concerns and reasoning for the matter publicly. It was overall described that the band wanted to pursue a different percussionist of alternate talent than the founding member. Aguilera was replaced with Justin Salinas, whom previously was a part of the bands Scars of Tomorrow and Catherine as well as serving as a past live drummer for MyChildren MyBride.

In April 2010, The Word Alive entered the studio in Ocala, Florida with Andrew Wade to record their debut full-length album, Deceiver. By June, Deceiver was fully mastered and engineered. On June 23, 2010 the band premiered their first single from the album, ?Epiphany? as streaming media online.The following day, Fearless Records released their 2010 Summer Sampler which also featured the track "Epiphany". A week later, the album's album art and track listing was released. Guitarist Zack Hansen explained upon this premiere that "We all felt like that was going to be the best choice considering how comfortable the recording process is with Andrew. The tracking was a lot of fun and everyone had a good time. We got the opportunity to stay in a house while we recorded and surprisingly we didn't party as much as I thought we would haha." Hansen later followed along explaining that his favorite track on the record is ?The Hounds of Anubis?, which was written by him and Pizzuti and stated that he "wrote this song with an 'Egyptian feel' to it and I think we got our point across." Smith described that its lyrics describe the times of when The Word Alive overcame their hardships that they face with the help and support from their fans. "The Hounds of Anubis" was released as the album's second single on July 26, 2010. It premiered on the official Revolver website.

By November of 2011, the band made plans to return to the studio on February 7, 2012 with Joey Sturgis to begin recording their next album, with an expected recording session lasting from that time until mid-March. However by February (and before the date of entering the studio), the announcement of two members leaving occurred; keyboardist, Dusty Riach and drummer, Justin Salinas were simultaneously confirmed to no longer be a part of the band. Salinas stated his reason was because he grew tired of touring, although Riach's reason was preferred to be kept silent.

In regards to the band's second studio album, it was reported that 17 songs were recorded in its process. 13 of those will be on the standard edition of the album, while the another three will be included on the deluxe edition. The name of the album will be Life Cycles and both editions will be released the same day.On March 23rd of the year, the group issued a statement that 18-year old Arizona resident Luke Holland has joined as the new drummer, however, Holland was not included for the recording sessions of Life Cycles. The drumming for the record was done by a friend of the band named Matt Horn wherein Holland joined after these sessions were already completed. The band's March 31st performance at Las Vegas' Extreme Thing music and sports festival was the first ever live performance with Holland.