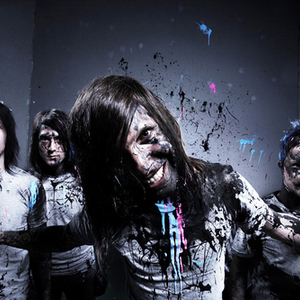 Greeley Estates is a post-hardcore/metalcore band formed in Phoenix, Arizona in 2002. While being in a post-hardcore band may not be extraordinarily unique, Greeley Estates pushes to the front of the pack as one of the few young bands putting the relationship with their fans above all else. Greeley Estates live shows go unparalleled. With a dynamic style reflecting numerous musical backgrounds, Greeley captures the audience and sears a lasting impression.

While being in a post-hardcore band may not be extraordinarily unique, Greeley Estates pushes to the front of the pack as one of the few young bands putting the relationship with their fans above all else. Greeley Estates live shows go unparalleled. With a dynamic style reflecting numerous musical backgrounds, Greeley captures the audience and sears a lasting impression. Stripped to its core, the musical foundation reflects catchy melody and pop sensibility infinitely amplified by a hardcore edge and intense vocals.

Although Greeley Estates calls Arizona home, they are more often found navigating the pages of an atlas. In addition to performing nightly, Greeley emphasizes getting to know fans on a personal level, providing the human identity that is clearly evident in their lyrics and presence. Though Greeley Estates' journey has just begun, they've already achieved unparalleled significance among their peers. They've completed 3 national tours including every date of Vans Warped Tour 2005. They've self-released a full length album Outside of This and a full length DVD The Death of Greeley Estates - both of which have garnered a top-five spot on SmartPunk's overall sales rankings.

Celebrating their recent signing to Record Collection and the release of their second album, the EP Caveat Emptor, Greeley Estates co-headlined the MySpace Fall Tour 2005 . They returned to the studio in January 2006 to record their second full-length album and then continued touring on Taste of Chaos 2006. In a world of fabricated celebrity, people are finding honest authenticity in Greeley Estates - not only in their music and performance, but in their efforts, their character, and lives that serve as the foundation for their music.

On January 31, 2007, bassist Josh Applebach announced that he would leave Greeley Estates for a teaching career in Arizona. Bradley Murray (previously with Versus the Mirror) from Tucson, Arizona became their touring bassist. His first live appearance with the band was on February 3, 2007 in Safford, Arizona.

On June 3, 2007, guitarist Dallas Smith announced that he would be leaving the band in order to start up a family with his wife and expected twin daughters (he and his wife were to subsequently lose the pregnancy). He made this announcement via a MySpace bulletin and announced that his last show would be June 20, 2007 at the Clubhouse in Tempe, Arizona.

After their Mexican tour with Silverstein, Brad Murray left the band for personal reasons.

After the band finished recording their new album Go West Young Man, Let The Evil Go East, Joshua Ferguson left to complete his apprenticeship as a hair stylist at BLACK MARKET HAIR in Calgary, Alberta, Canada; personal reasons seem to be why he left.

Greeley Estates had announced Tyler "Telle" SMith as their new bassist, who was formerly of In Fear and Faith. Telle played his first show with the band on February 9, 2008, at the Clubhouse in Tempe, Arizona.

In 2003 Greeley Estates had a track, entitled "Let The Evil Go East", on the Warped Tour 2008 compilation album.

On Friday, November 14, 2008, Greeley Estates announced that their newest bassist "Telle", found within the course of the same year, had left the band. The blog on their MySpace stated:

"Once again, the curse of the Greeley bass players.... has struck again! Eight hours before leaving for the Alesana tour, Telle told us that he would no longer be in Greeley Estates. But don't fret! We will not be missing any shows... we could never do that to you guys/girls! Our tour manager Dave is filling in last minute for us. This means, you all need to come out and sing louder than ever. See you soon!!!!"

A new song, entitled "Seven Hours", is streaming on their MySpace page. There will be 12 tracks on the new album. The album's artwork was recently posted on their newest MySpace blog. On the 27th of November, the band uploaded a second song off the new album. The song is called "Jealousy Breeds Killing Sprees" which features guest vocals from longtime friend Craig Mabbitt, from Escape the Fate. Another new song from album "No Rain, No Rainbow" entited "Friends Are Friends For Never" was posted on their MySpace page on January 6th. The album will be released on January 26th.

Calling All The Hopeless (EP)

The Death Of Greeley Estates

No Rain, No Rainbow

Far From The Lies