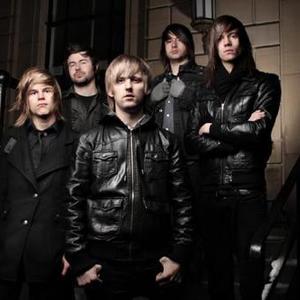 Before Their Eyes is a post-hardcore band from Findlay, Ohio, formed in 2007. The band is currently signed to Rise Records. Founded originally by vocalist Nick Moore and Jim Nahorny of "The Drama Summer", the name of the band is taken from the New Testament verse Romans 3:18: "There is no fear of God before their eyes." They do not claim to be a "Christian band" they are more of "Christians in a band".

A month after conception, Jim Nahorny left the band to finish his college degree and to pursue other interests. The song "Their Throats are Open Graves" is taken from Romans 3:13. Their second album, The Dawn of My Death, was released October 28, 2008. The album reached #10 on the Billboard Heatseekers chart

The band has played many tours, including: the Hot N' Heavy Tour alongside Drop Dead, Gorgeous, and He Is Legend, the Across The Nation Tour with A Skylit Drive and Four Letter Lie, the Black on Black Tour with Escape the Fate, the Scream the Prayer Tour in 2008 with Here I Come Falling, and Agraceful, and the One Moment Management Tour with Eyes Set to Kill, and LoveHateHero. Recently the band posted a blog, saying that they've finished tracking the album. The album's title was announced to be Untouchable and it was released on March 9, 2010.

On March 9, the band released their third studio album, Untouchable; the first single from the album is the song "Sing To Me".

On April 18, 2010, Nicholas Moore (lead singer, keys, programming) announced that he was no longer in Before Their Eyes and asked for support for his new side project. This was announced on his Twitter page where he tweeted "I am no longer in Before Their Eyes. I hope you all support my new project like u did BTE when I started it.Official statement soon! Love,N". The remaining members are currently scouting possibilities for a new lead singer.

On May 5, 2010, Landon Tewers (guitar and vocals) announced that he was leaving Before Their Eyes and that he would finish the remaining shows posted on the band's MySpace. This was announced on his Twitter and Live Journal. He is now in the band The Plot In You as their lead singer.

According to the band's official Facebook page, they have gained three new members, a vocalist and two guitarists, and will be announcing a new one every Wednesday, beginning August 18, 2010. The first member announced was guitarist, Jordan Disorbo. On Wednesday, August 25, 2010, Before Their Eyes posted a second video on their Facebook announcing the second new member of the band, Evan McKeever who will be playing guitar and doing backup vocals for the band.

Fall 2010 Before Their Eyes will be touring with Rufio.

The Dawn Of My Death