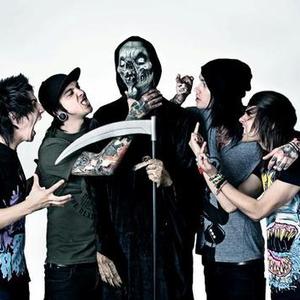 Pierce the Veil is an American rock band from San Diego, California. Formed in 2006, the group was founded by brothers Vic and Mike Fuentes after the disbandment of the group Before Today (formerly Early Times), which was formed out of the San Diego punk rock scene. Pierce the Veil has released two studio albums and has continuously been inducted into several worldwide tours since the release of their debut album, A Flair For The Dramatic in 2007. A new album, titled Collide With The Sky, was recently announced for release on July 17th, 2012, under the label Fearless Records.

Embracing their defiant brand of progressive post hardcore and gaining a rabid fan base thanks to their incredible live show, Pierce The Veil have become a hot commodity over the past few years. But with the release of stunning new album Collide With The Sky, the San Diego natives are truly en fuego.

Deploying every shred of musical prowess in their artillery, Pierce The Veil have poured heart and soul into new album Collide With The Sky - and it shows. Blending the unique vocal style of singer Vic Fuentes, incendiary guitar lines and soaring melody, the band's third album is an aural exploration that at once both packs a punch, while finding the pockets of calm in the chaos - a talent that has made the band such a refreshingly exhilarating force in the scene. Having toured with some of the biggest names in the music, including Bring Me the Horizon, A Day to Remember, Of Mice & Men, Thursday and The Devil Wears Prada, the band tear into a packed tour schedule in support of Collide With The Sky, with a full summer on Vans Warped Tour's main stage and a UK headline tour this fall.

Collide With The Sky

A Flair For The Dramatic