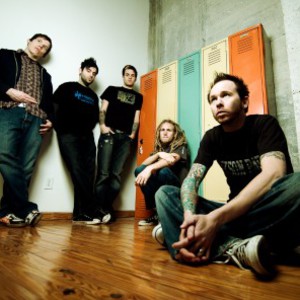 It won't take long for listeners of Spoken's sixth studio album to be reminded of how hard and fast the band can rock. The three songs that open the album, "History Erased," "Close Your Eyes" and "Not Soon Forgotten," start things off with nine minutes of blazing fast guitar riffs and loud and quick-rising vocals, all bounded by a full-sounding rhythm section. After two albums for Tooth and Nail where the band explored more anthemic avenues, the quintet found itself re-examining its hard rock and metal roots on its third record for the label.

After two albums for Tooth and Nail where the band explored more anthemic avenues, the quintet found itself re-examining its hard rock and metal roots on its third record for the label. The resulting album is an 11-song sonic attack that knows when to slow down the pace and when to pounce back like a slap to the face. "We didn't intentionally go for a heavier sound," guitarist Jef Cunnigham said. "We just wrote what came to mind and I think it turned into some of our best material."

Late last year the band's hectic touring schedule slowed enough for them to start working on the record, though they had a few geographical obstacles to overcome before starting. With members spread across four states, each created a secret Myspace for a non-existent band where they would post song ideas for the others to listen to.

Singer Matt Baird would download these parts to his iPod, where he began to craft the lyrics for the record. His finished work centers on topics like redemption and restoration, and reaches its pinnacle on the album's tenth track, "When Hope is All You Have," which began as a phrase he used during his father's funeral just before recording began.

"There are songs about healing and hope and about moving on after we've made mistakes," Baird said. "I felt some pressure in writing, hoping my parts would turn out as good as the music. But I think it all came out better than I could've imagined." After their internet-aided pre-production, the band decided to set up shop in a one-room cabin in the Smokey Mountains of Tennessee for over a month to mold those song ideas into the core of the album. After three weeks of work, Baird joined the band for the final two weeks to add his lyrics to the fray.

With songs in hand the band then headed to Lakeside Studios in Knoxville for a month-long session with producer Travis Wyrick (P.O.D., Disciple), who also produced 2005's "Last Chance to Breathe," a record that helped the band expand its fanbase as it ventured into poppier leanings.

"I'm blown away by the finished record," Cunnigham said. "We wrote these songs to please ourselves, to write songs that we wanted to play live and we ended up with a few that were heavier and harder than anything on the last two records." Wyrick and the band have created a sound less reliant on overdubs and layering and more focused on bringing the band's live show to mind with a more sparse sound that still rocks as hard as ever. Maybe more so. "We wanted to experiment with heavier songs and think further ahead in the lifespan of the band," Baird said. "And with these heavier songs it really feels like a step toward the future and a reflection of the past."

Echoes Of The Spirit Still Dwell

A Moment Of Imperfect Clarity