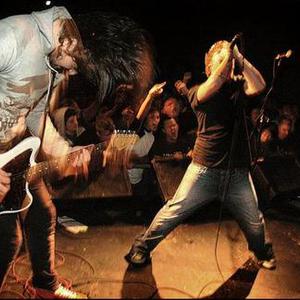 There are at least three artists with this name; a seventies Australian rock band, a post-hardcore band and a Dutch progressive rock band. 1. Finch was an American post-hardcore band from Temecula, California. They reformed from hiatus in November 2007 after a two year break. They have completed a reunion tour across the east coast, west coast's of America and the U.K. They have since completed a new self titled EP (released July 2008); their first new material for three years.. They are currently unsigned, focusing on more freedom to work independent from a record label.

1. Finch was an American post-hardcore band from Temecula, California. They reformed from hiatus in November 2007 after a two year break. They have completed a reunion tour across the east coast, west coast's of America and the U.K. They have since completed a new self titled EP (released July 2008); their first new material for three years.. They are currently unsigned, focusing on more freedom to work independent from a record label. The band was formerly part of Drive-Thru Records who had a contract with MCA Records to transfer bands to their label. MCA Records was later bought out by Geffen Records. The band formed in 1999 and were originally a Deftones cover band. Starting out as entirely different band called Numb, they added Randy to the fold, re-named themselves Finch and changed tunings from C to D Flat. Their EP Falling Into Place sold over 6,000 copies only months after being released.

In August/September 2001, the band entered the studio up at Big Fish studio in Encinitas, CA to begin working on their first full length, What It Is To Burn. It was produced by Mark Trombino, who had worked with Jimmy Eat World, blink-182 (Randy Strohmeyer's, at the time, favorite band), Midtown and many others. After touring extensively (2 years) in support of this CD, Finch contributed a new song Worms Of The Earth to the motion picture Underworld soundtrack in 2003, that track was also included on "Atticus Clothing's... Dragging The Lake 2". It signaled a taste of things to come for Finch's music. Following this was a lengthy departure from the public eye, which developed into trying times for the band. Mark Trombino was fired as the producer of the new album, founding drummer Alex Pappas left the band due to musical differences, and pressure was coming down from the label to hurry up and get the album finished. Eventually Finch found their producer, Jason Cupp.

On February 19th 2006, the band's official website, www.finchmusic.com, announced that the band were going on "indefinite hiatus", claiming there were various reasons behind the decision, the most important of which simply being the band members had "different individual priorities". It has been reported that some members of Finch are already jamming with new projects, such as "The Sound of Animals Fighting".

On 29th October 2007, the band announced that they were reforming, they subsequently released a self-titled EP on 22 July 2008. They started recording an album, but on December 17th 2010 they announced their breakup, for the second time..

2. Finch (1974 - 1978) was a Dutch progressive rock group that continued to be known internationally years after their final concert on 14 November 1978 in World Forum Convention Center of The Hague. 2. Finch was established by guitarist Joop van Nimwegen, bass player Peter Vink (Vink meaning Finch in Dutch) and drummer Beer Klaasse. Nimwegen and Vink had earlier worked together in the Dutch formation Q65. The musical leader was Joop van Nimwegen. For lack of a good singer, Finch decided to build a repertoire of instrumental rock. Keyboardist Paul Vink joined, but was soon replaced by Cleem Determeijer, then a student at the Rotterdam Academy of Music.

The first album, Glory Of The Inner Force, was published in Finch's native Netherlands, as well as by Atlantic in the US. On both sides of the ocean the album received positive reviews. Determijer wanted to concentrate on his piano studies and was replaced by Ad Wammes.

The second album, Beyond Expression, became a Record of the Week on Radio Veronica, a popular Dutch seaborn station. Beer Klasse was replaced by Hans Bosboom, after which Bosboom was replaced by Fred van Vloten. Finch started to make a name for itself and began to attract crowds to their concerts in the Netherlands, Belgium, and Germany.

A third album, Galleons Of Passion was published in the Netherlands and the UK, however, the frequent personal changes in the rock group made it impossible to continue. In 1978 the partnership was discontinued when Joop van Nimwegen decided to quit. Finch's three albums continue to attract the interest of those who enjoy early classic and progressive rock.

3. Finch was an Australian hard rock band, initially formed in Sydney as Stillwater in 1973, they soon became Finch. In 1973 they won a 2SM/Pepsi Pop Poll, winning a contract with Picture Records who released their first single in 1974 (while guitarist Spencer was still in high school). In 1978, after signing a deal in the US with CBS Records subsidiary label, Portrait Records, Finch was changed to Contraband (due to the existence of the Dutch band also named Finch). Earlier Finch material was re-released under the Contraband name but they broke up in 1979.
Former band members include Mark Evans (AC/DC) and Bob Spencer (Skyhooks, The Angels).

A Far Cray From Home (Live)

New Beginnings / What It Is To Burn