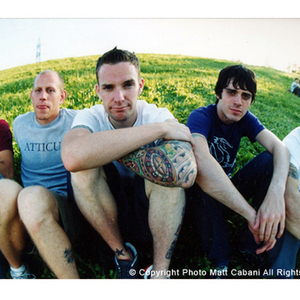 The Movielife was a pop-punk band from Baldwin, New York (Long Island). Formed in 1997, the band put out its first full-length, It's Go Time, in 1999 on Fadeaway Records. By this point, the classic lineup of Vinnie Caruana (vocals), Brandon Reilly (guitar), Alex Amiruddin (guitar), Phil Navetta (bass) and Evan Baken (drums) had coalesced. The band built up a strong local following on the strength the album and their live show, and soon jumped to Revelation Records, releasing This Time Next Year in 2000.

Like all subsequent released by the band, the album was produced by Brian McTernan. The band toured hard to support the record, including an appearance at the first Skate and Surf Festival in the spring 2001 and a long national tour support Boysetsfire and the then-unknown Thursday that summer. Having built a more national fanbase, helped along by an appearance on the fourth volume of the ever-popular Emo Diaries series, the band jumped to Drive-Thru Records at the end of the tour, and released an EP, Has A Gambling Problem in the fall. Aided by the single "Walking On Glass", the Movielife spent much of the next year on the road supporting other Drive-Thru acts, including Midtown and, later, New Found Glory. On that New Found Glory tour, the band was involved in a serious van accident in North Dakota, forcing the band off of the road and providing the impetus for the centerpiece of their next full-length. Shortly before the recording of Forty-Hour Train Back to Penn, which was finally released in February 2003, Amiruddin departed and was replaced by Dan Navetta. The band embarked on a headlining tour to support the album. In late summer/early fall of 2003 the band embarked on their final tour playing a slew of $5 shows with supporting acts Fairweather and The Honorary Title. By early 2004, ex-Movielife projects had surfaced, Brandon Reilly fronting Nightmare of You and Vinnie Caruana fronting I Am the Avalanche.

Cities In Search Of A Heart

Forty Hour Train Back To Penn

Has A Gambling Problem

This Time Next Year