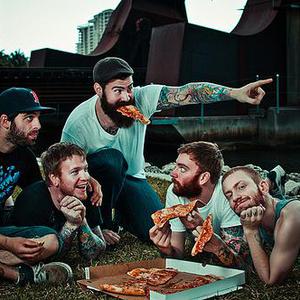 Four Year Strong is an American Pop-punk band from Worcester, Massachusetts, United States , formed in 2001. The group consists of vocalists and guitarists Dan O'Connor and Alan Day, bassist Joe Weiss, and drummer Jackson Massucco. They have released four studio albums; the latest, 'In Some Way, Shape Or Form', was released on November 8, 2011. Their music tends to be very fast paced and motivational. History Formation and It's Our Time (2001?2006)

The band's 2007 release Rise or Die Trying with I Surrender Records peaked at number 31 on the Billboard Heatseekers chart in its debut week. On the back of their increasing popularity, the band was signed to Decaydance Records in February 2008.

On July 21, 2009, Four Year Strong released an album of covers from the 1990s, titled Explains It All. The album features guest appearances from Keith Buckley of Every Time I Die, Travis McCoy of Gym Class Heroes, and JR and Buddy of Less Than Jake. The band explained their reasoning behind the album in a MySpace blog, saying "It's what we grew up listening to. Everyone has those songs that instantly transport you back to when you were younger. Whether we were in our bedrooms playing air guitar, or riding in the car to little league practice, or it was just that song that was all over the radio during that awesome summer at the Cape. These songs have impacted us in some way and we want to share that feeling with you."

The band's 3rd full-length album, Enemy of the World, was released on March 9, 2010 on Universal Motown Records. The band released the album's first single, "It Must Really Suck to Be Four Year Strong Right Now", on December 21, 2009. The name of the song is a reference to the final sentence of a review in Alternative Press in which the magazine praised Set Your Goals' new album while remarking on the future of Four Year Strong and how their record would compare. The vinyl record was made available to pre-order on March 2, 2010. The album sold 12,400 copies in its first week, debuting at number 40 on the Billboard 200.

On April 3, 2011, it was announced that Josh Lyford would be leaving the band. Initially, it was implied that Lyford had chosen to leave in order to focus on his side project, Foxfires. However, it was later confirmed by both Lyford and Alan Day, that the band had elected to remove synthesizers from their sound leaving no room for Lyford to continue. The band has said they will continue as a four piece.

On April 13, 2011, in an interview with Alternative Press, the band revealed that they had been in the middle of recording their fourth studio album with producer David Bendeth in New Jersey's House of Loud. The band is set to return to the studio, without Josh Lyford, to finish the album in June, after they finish touring with Rise Against. Vocalist Alan Day has also revealed that the new songs the band had written were very diverse, and that the new material is different than anything the band has ever written. While touring with Rise Against, they have been playing a newly recorded, yet unreleased song called "Falling on You".
On August 18, 2011, the band released "Stuck in the Middle", a new song from the upcoming album. The band announced that the new album will be titled In Some Way, Shape, or Form, and will be released on November 8, 2011. On September 8, 2011, the band released another song from the album, entitled "Falling on You." The first official single from the album, "Just Drive", is set for release on September 27, 2011

During the Fall 2011 AP Tour, the band played another new unreleased song which will be released on the upcoming album. The band dedicates it to fans who have been there "from the very beginning, and will be there till the very end." a video of the song has been leaked on YouTube. It is called "Fairweather Fan."

The band has done multiple national tours, sharing the stage with such bands as The Starting Line, Slip On It, Hellogoodbye, From First to Last, Every Time I Die, Meg & Dia, Hidden in Plain View, Alexisonfire, All Time Low, Mayday Parade, New Found Glory, Bayside and Steel Train. The band toured in February?April 2009 as part of the Taste of Chaos tour, alongside Thursday, Bring Me the Horizon, Pierce the Veil, and Cancer Bats. They undertook the Summer co-headline tour with Set Your Goals, and also Fireworks, The Swellers, Polar Bear Club, A Loss For Words, Drive A and Grave Maker from July to August 2009. Four Year Strong also performed on the Australian Soundwave festival in February and March 2010, alongside headliners Faith No More, Janes Addiction, Placebo; also playing alongside Alexisonfire, Set Your Goals, A Day To Remember, Paramore, It Dies Today, Gallows, Emarosa, A Wilhelm Scream, Anthrax, All Time Low, Escape The Fate, This Is Hell, Enter Shikari, Anti-Flag, Baroness, Comeback Kid, The Almost, Dance Gavin Dance, Architects, You Me At Six, Rolo Tomassi, Dichi Michi, Sunny Day Real Estate and many more. The band was in the lineup for Vans Warped Tour 2010 and played on the Altec Lansing stage along side Breathe Carolina, Hey Monday, and Set Your Goals.[7] They also played the first day on the Bamboozle festival. Late 2010, Four Year Strong headlined a tour with Comeback Kid, The Wonder Years, American Fangs, and Mountain Man. The tour was entitled "Tonight We Feel Alive!", and spanned the entire United States. In February 2011, Four Year Strong co-headlined the Kerrang! Relentless Tour 2011 with Good Charlotte with support from Framing Hanley and The Wonder Years, The tour began February 3rd in Dublin, Ireland. On the 15th February 2011 it was announced that they had been added to support Blink 182 on their UK tour alongside You Me At Six They will be joining Rise Against and Bad Religion on a US summer tour in 2011. They have also announced that they will come back to Australia later in the year to play Soundwave Revolution along with already announced bands The Damned Things, Story of The Year, Every Time I Die, Hellogoodbye, We Are The In Crowd and many others. They still have yet to announce an upcoming Detroit show. It is long overdue.

The band's sound can be described as popcore a blend of pop punk, hardcore punk, and power pop. This genre is popularly referred to as "easycore" or "happycore". The band simply developed their sound off the idea of playing 'exactly what they want to hear' or music that they would listen to, but no one else was playing at the time.[8] The band has cited their influences as being Lifetime, Saves the Day, Gorilla Biscuits, Blink-182, and New Found Glory, to name a few. Though the band would primarily start out as a post-hardcore , the release of their demo in 2004 would mark a shift from post-hardcore to more synthesizer-heavy tracks, where the band would begin to embrace the styles of power pop and general hardcore punk. Prior to the release of and at times within Rise or Die Trying, the band also incorporates more facets of modern hardcore, such as double bass drums, breakdowns and screaming vocals. For their 3rd studio album, Enemy of the World, the band decided to expand upon their hardcore influences.
Influences

The band has many references to 1990's pop culture. They have been known to quote lines from '90s films in lyrics/song titles/ and in conversation. They were influenced by all the bands on their cover album Explains It All.

Go Down In History (EP)

In Some Way, Shape, Or Form

Enemy Of The World (Special Edition)