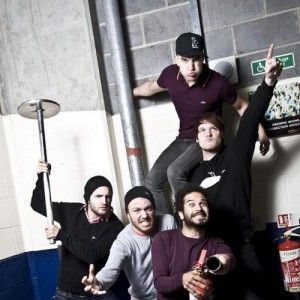 Since the release of the debut album This Is A Stickup...Don't Make It A Murder, HIT THE LIGHTS have built a strong and loyal fan base worldwide through constant touring. The band has toured with the likes of New Found Glory, Boys Like Girls, Hellogoodbye, The Rocket Summer, appeared on the Warped Tour, Bamboozle as well as a sold out headline tour. Just as the band were getting ready to record their sophmore effort, they were dealt a serious setback when original singer Colin Ross decided to leave the band for a quieter life off the road.

After months of looking for a new singer, they chose from within with guitarist Nick Thompson stepping up to lead vocals. Right away the band posted a cover of ?The Warrior? by Scandal on absolutepunk.net, reaction was overwhelemingly positive, and the band knew they made the right move. With renewed determination, the band chose former Hidden In Plain View guitarist Rob Freeman to produce the album at his studio and have Zack & Ken (Mayday Parade, Cartel) mix. New songs capture the energy of the first album and more, fans will not be disappointed. From the pop punk of ?Drop The Girl? , ?Statues? to the pop sounds of ?Tell Me Where You Are? and ?On and On?. This will surely make the old fans happy while gaining new ones.

In the early part of 2012 Hit the Lights played direct support on the Strenght in Numbers tour (S.I.N.) for Destroy Rebuild Until God Shows with other supporting acts Like Moths To Flames, Sparks the Rescue, The Action Blast (an up and coming band from Chicago). It lasted from Mid January until the early part of March in 2012.

Just To Get Through To You

This Is A Stick Up... Don't Make It A Murder