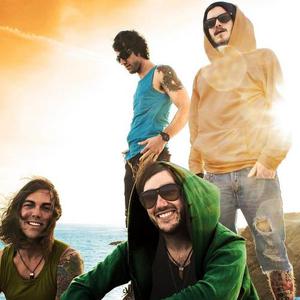 In 2003, Halifax was just another in a myriad of unsigned indie outfits rolling the highways of North America. Sharing van space, shitty hotel rooms, bodily aromas, Old Milwaukee and a collective dream in between crappy jobs in chain restaurants and landscaping, the group recorded and supported its initial EP, A Writer's Reference. Within a year's time, Halifax found itself among the rookie bands on the 2004 Warped Tour.

Within a year's time, Halifax found itself among the rookie bands on the 2004 Warped Tour. By early 2005, after bowling them over Drive-Thru founders Richard Reines and Stefanie Reines during a New Jersey gig with The Early November, the label tweaked and reissued Reference. Halifax continued touring and building its fanbase while concocting what would become The Inevitability of a Strange World, a collection of riff-heavy arena rock anthems that blend post-punk hardcore with hard rock influences, a la M?tley Cr?e.

The band took a three year break which was everything but a holiday: it was ?a trial in life that gave us one ultimatum: stand up and fight for what we believe in or break up. 90% of bands fail, we like to think we're in the other 10%" explains Tommy. ?Not to mention how much we have matured in the last 3 years as musicians and songwriters, let alone adults. We planted our feet firmly on the ground when we made this commitment to music and it's going to take a lot more than faulty indie labels, lawsuits, and debt to sniper us out. We're not a band that backs down when faced with barriers. We have more respect for our fans and ourselves than to let anything get in the way or stop us from being artists.?

Wielding a melodic guitar driven sound, the quartet is back with their new EP Align. Halifax shows off their newly polished song-craftsmanship while still staying true to their musical influences, as they combine pop sensibility with their unmistakable riff rock and pounding rhythms. The band even shows off their penchant for reggae music in "Snake Slide", and "No Saturation".

The Inevitability of a Strange World

Start Back At Start