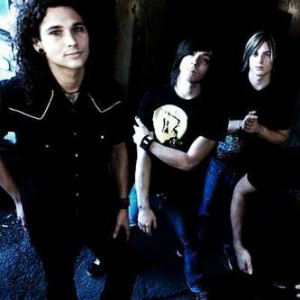 Stutterfly was a rock band created in 1998. What started as a hobby for four young men from Kelowna, British Columbia, Canada, swiftly turned into a passionate and emotional outlet for its four members: Chris Stickney (vocals), Jordan Chase (bass, vocals), Bradyn Byron (guitar, vocals), and Craig Langerud (drums). In 2003, Jason Ciolli (guitar) joined the band and in 2004, Ryan Loerke took over on drums to complete the line-up. The band is now currently Secret And Whisper with a new vocalist, guitarist, and different type of style.

Their melodic sound resonates with three-part vocals and harmonies, intense screaming, hard-hitting drums, and thick driving guitars. These, punctuated with transparent lyrics, form a sound distinct from other bands.

Stutterfly's demo, "Hollow", quickly turned around and sold over 3,000 copies at their shows alone. "Broken In Pieces...", their first full-length album, was released in 2002 (later re-released on the bands' own label, The Elysien Project). They tour the United States and Canada extensively.

After reaching number one on mp3.com in their genre, Stutterfly maintained a top 10 position for over a year, and received almost 200,000 plays. With the help of Los Angeles based Freeze Management (the Used, Story Of The Year, Goldfinger) Stutterfly inked a deal with Madonna's Maverick Records (Deftones, Alanis Morissette, etc.) in the summer of 2003, and later toured with fellow labelmates Story of the Year. Working with producer Ulrich Wild (Deftones, Taproot, Bleeding Through), the band released their first album under Maverick, "And We Are Bled of Color," on June 21, 2005.

After disappointing sales of "And We are Bled of Color", Stutterfly was dropped from Maverick. Shortly after this, lead singer Chris Stickney left the band. Charles David Furney (formerly of thebleedingalarm) soon took the reigns at vocals. Despite a huge difference between Chris and Charles' voices, the band recently began writing for a new, full length album. They've, so far, produced new songs under the name Secret and Whisper such as "Vanishings" and "Attacker" as demos.

And We Are Bled Of Color