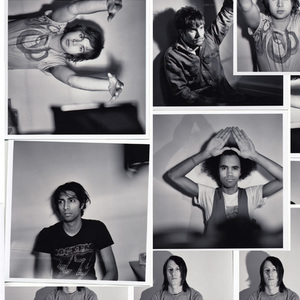 The band was considered unusual in that it had two dedicated lead vocalists. In addition to this, Cody and Morgan performed back-up vocals. Later albums (...Burn, Piano Island, Burn and especially Crimes) featured a degree of experimental instrumentation: Morgan often deviated from bass to add a second guitar or synthesiser, and also utilized a sampler. Johnny added piano/Wurlitzer to many more songs, a process which actually began on ?Time for Tenderness? from This Adultery Is Ripe. He has claimed he always wanted to incorporate such instruments into the Blood Brothers' sound, but only on signing with a major label prior to ?Burn, Piano Island, Burn did he have the means to do this.

The band has been described as punk, hardcore, post-hardcore, spazzcore and even extremo and sasscore (see Alternative Press Issue from October 2005). In small circles discussions of the band related with the concept that they have influences from the no wave punk scene of the 1980's. The band made wide use of various punk/hardcore vocal styles (i.e. screaming) and instrumentation (i.e., fast drumming and plentiful power chords).

While two ?lead' vocalists produced a unique spectacle, the on stage aura they produced was due in great part to the band's musicality. Blilie and Whitney's voices tended to overlap in the style of punk guitar rhythm/lead arrangements. The two vocalists contrasted each other to good effect: Whitney's voice was generally accepted to have evolved from the slurred, venomous drawl on This Adultery Is Ripe to the insanely high-pitched squeals (?like a child being tortured?) heard on Crimes, while Blilie's maintained the same low, robust ferocity throughout so that his screams continue to stand out in much of their material.

Blood in Blood Out