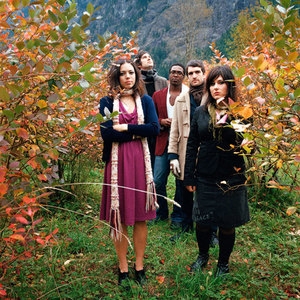 Pretty Girls Make Graves was an American art punk band which formed in 2001 in Seattle, Washington, United States and intitally consisted of Andrea Zollo (vocals), Derek Fudesco (bass, vocals), Jay Clark (guitar, keybards), Nathan Thelen (guitar) and nick dewitt (drums). Thelen left in 2004 and that same year, keyboardist Leona Marrs joined the band. In 2007, the band broke up partially due to Dewitt's decision to leave the band (although he would play with the band through their final concert).

The band was was formed in Seattle and named after The Smiths song of the same name (which itself was named after a quote from Jack Kerouac's The Dharma Bums). Andrea Zollo and Derek Fudesco had played together previously in The Hookers, as well as The Death Wish Kids and Area 51 along with Dann Gallucci, with whom Derek had formed The Murder City Devils. Not long before the The Murder City Devils disbanded, Derek and Andrea formed Pretty Girls Make Graves along with Jay Clark, Nick Dewitt and Nathan Thelen. They played the Coachella Valley Music and Arts Festival in 2004.

Pitchfork Media announced that the band was breaking up on 29 January 2007. Their final two shows were 9 June 2007, in Seattle.

The band released their first EP on Dim Mak before releasing their debut album Good Health on Lookout Records in April 2002. The band would later sign to Matador records where they released The New Romance. Guitarist Nathan Thelen left Pretty Girls Make Graves in March of 2004 and Leona Marrs (formerly of Hint Hint) joined as a multi-instrumentalist. On January 29, 2007 the band announced that Nick had left the band and their May 2007 tour would be their last.