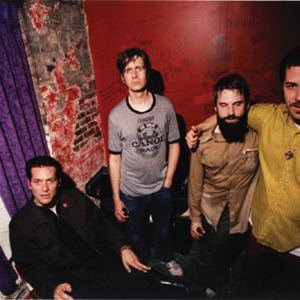 Hot Snakes was an American post-hardcore band led by Rick Froberg and John Reis, formed in 1999. Reis and Froberg had previously performed together in Pitchfork and Drive Like Jehu while living in San Diego, CA during their youth. Although they share sonic similarities with bands its members had previously been involved with, Hot Snakes' sound was much more punk-influenced than Drive Like Jehu and Pitchfork.

Although they share sonic similarities with bands its members had previously been involved with, Hot Snakes' sound was much more punk-influenced than Drive Like Jehu and Pitchfork. Reis and Froberg were also heavily influenced by bands such as Wipers, Suicide, and Michael Yonkers Band, and these influences gave Hot Snakes a distinctive sound. Their songs are much shorter and succinct than Drive Like Jehu, but retain the discordant guitars and singing that define DLJ's best work. Hot Snakes recorded three excellent studio albums, 2000's Automatic Midnight, 2002's Suicide Invoice, and 2004's Audit in Progress. The Peel Session EP (2005) and Thunder Down Under (2006) live albums both featured muscular live versions of their songs.

On 7 July 2005, Reis announced that the band would be calling it quits in a hand-written letter posted on their label's (Swami Records) Web site. Shortly after the split-up of the Hot Snakes, a cover of Government Issue's "Time to Escape" appeared on the soundtrack to Tony Hawk's American Wasteland videogame. This song was the last ever recording by the Hot Snakes. While the Hot Snakes have called it a day, John Reis continues to play in The Night Marchers, and with Mario Rubalcaba in the power pop trio The Sultans and run the Swami Records label. Mario Rubalcaba also plays in the San Diego band Earthless. Gar Wood continues to record music and play in Beehive and the Barracudas. Rick Froberg currently lives in New York, playing in Obits and working as a visual artist and illustrator.

The band announced a reunion in 2011.