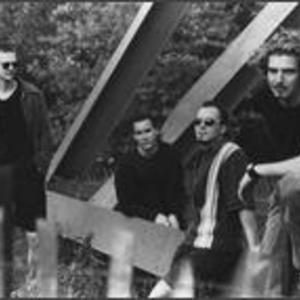 Glueleg was a Canadian alternative rock band that was formed in 1990 by Carlos Alonso and Ruben Huizenga. They had several hit singles from 1994 to 1997 with the songs Heroic Doses, Come With Me and Mr. Pink off their second and most successful album Heroic Doses. And with Pistons, and Dragonfly off their third Silvia Massey produced album, Clodhopper. The band, led by Chapman Stick player, songwriter and vocalist Carlos Alonso and guitar player, songwriter and vocalist Ruben Huizenga broke up in 1998, with the members all going on to different projects.

The band's music consisted of a hard-edged progressive rock sound that was highly unique and unconventional for the time, yet the songwriting was cleverly arranged and regarded favourably by radio stations. The music prominently featured the sounds of Chapman Stick, saxophone and trumpet arranged alongside hard rock guitar and vocal raps. A recording contract with Liquid Records and national record distribution through Page Publications gave the band enough exposure to support 6 National Tours with opening spots for I Mother Earth, The Tea Party and Our Lady Peace as well as performing with other Canadian bands of that era. In 1997 the band signed a distribution deal with EMI.

The band released three albums and 1 EP: Angst (1991), Park Alien (EP-1993) , Heroic Doses (1994) and Clodhopper (1997). Their career included various performances at Edgefest and five music videos that received considerable airplay in Canada. Their music was featured on the soundtrack to the movie National Lampoon's Senior Trip (1995), an episode of the television series Due South (1997) and on various compilation CDs through a Molson's beer marketing campaign (1994). As well, Alonso was featured in a Molson's beer television commercial during this campaign.