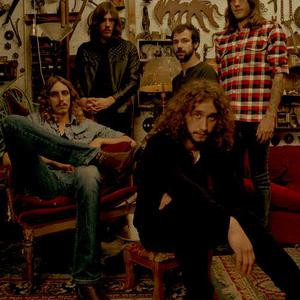 The Beginning: The band started out as What About Frank? in 2004 in Red Bank, New Jersey. During their career as What About Frank? they were twice recognized as Best Live Band at the Asbury Music Awards. They played many many shows including the CMJ Music Marathon in New York City, the Van's Warped Tour, The Great Bamboozle Festival in Asbury Park, New Jersey, and South by Southwest. Their debut self-titled release was one of the top-selling albums in local retail, and received airplay on both satellite and commercial radio.

In 2007 the band changed their name to The Parlor Mob so as to "...have a name that's less hokey and more representative of our music" said drummer Sam Bey in a New York Times interview. On September 14, 2007 the band signed with Roadrunner Records and have recorded an album at Asheville, NC's Echo Mountain studios. Jacquire King (Tom Waits, Kings of Leon, The Dwarves, Modest Mouse) signed on to produce the album. The Parlor Mob's debut album, And You Were a Crow, was released on iTunes on March 11th, 2008 and was released in stores everywhere on May 6th, 2008.

And You Were A Crow