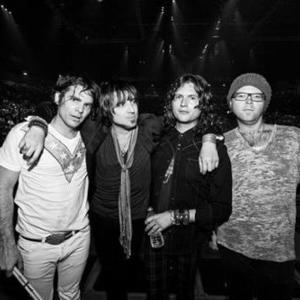 Rival Sons is an American blues-rock band from Los Angeles, California. The band has digitally self-released one album and also digitally released a self-titled EP through Earache Records. They will release their debut album worldwide entitled Pressure & Time in June 2011 through Earache Records. Rival Sons advocate veganism and spirituality along with classic rock and roll. History: 2008-2010

Rival Sons advocate veganism and spirituality along with classic rock and roll.

2008-2010
Formed in June 2008 the line-up for Rival Sons was completed when singer-songwriter Jay Buchanan joined the band. They recorded Before the Fire, and digitally self-released it in June 2009. The single Tell Me Something, from the album was used in a television campaign for Izod Indy car racing.

In 2010 the band opened for Alice Cooper, several USO shows with Kid Rock, and a televised performance, centre track, at The Indianapolis 500, the world's largest sporting event., May 2011 The band played CMJ in New York in 2010.

The band signed with Earache Records in 2010, who will release Pressure & Time in June 2011. The album was written, recorded, and mixed in just 20 days, a process the band says is to their liking as it ensures a rawness for both the listener and the band.

The track Get Mine was featured in a Jeremiah Weed premium malt beverage television advertising campaign showing an arm wrestling competition.

2011
Rival Sons played a showcase in London at HMV's Next Big Thing at the Camden Barfly on February 12th 2011, with Sons of Icarus and Vintage Trouble.

Rival Sons played in Dallas for the football championship at Aces & Angels Salute to the Troops hosted by Gene Simmons from KISS on Wednesday February 2nd 2011.

Rival Sons played a showcase in London at HMV's Next Big Thing at the Camden Barfly on February 12th 2011, with Sons of Icarus and Vintage Trouble.

The album artwork for Pressure and Time was created by graphic designer Storm Thorgerson who has also designed artwork for Led Zeppelin, 10cc and, most notably, Pink Floyd's Dark Side of The Moon.

Rival Sons are supporting Judas Priest on the UK leg of their 2011 Epitaph World Tour including a performance at High Voltage Festival.

Nobody Wants To Die (CDS)

Shooting Stars (In The Woods) (CDS)

Live From The Haybale Studio At The Bonnaroo Music & Arts Festival