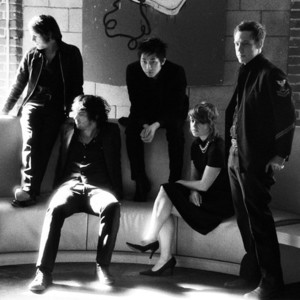 The Airborne Toxic Event is an alternative rock band that formed in Los Angeles, California, United States in 2006. The band consists of Mikel Jollett (vocals, guitar), Steven Chen (guitar, keyboards), Anna Bulbrook (viola, keyboards), Noah Harmon (bass) and Daren Taylor (drums). The band is best known for their single "Sometime Around Midnight", which was a hit in the UK as well on American alternative radio in 2008 and 2009.

Named after a section of the book White Noise, by Don DeLillo, the group incorporates string instruments and keyboards, along with a standard rock lineup of guitar, drums, and bass guitar. They are signed to Majordomo Records. On March 4, 2009, the band signed to Island Records.

Formed in the wake of a series of personal tragedies in the life of front-man Mikel Jollett, the band has gathered a reputation for one of the most exciting and energetic live shows in years. Stomping, screaming, wailing, crooning through bony rock songs and enormous dark anthems, the band embodies the desire to live life fully in the face of a world saturated with media and fear. The Cali five-piece's eponymous debut EP includes nods to rock music's most transcendent tidbits: subtle
references to the sad-eyed melancholy of the Cure, the balled-fist intensity of the Fall, and the art school disaffection of the Velvet Underground.

The Airborne Toxic Event released their second album, All At Once on April 26, 2011. Songfacts reports the band explaining: "It's called 'All at Once' because the songs deal with the idea of sudden change?how life generally doesn't change incrementally. Your parents die, a child is born, the airplane shakes, a former love from a former life walks casually by you on the street, and suddenly everything is different. We live in the quiet passages between these extraordinary moments of change. It's exhilarating. It's terrifying. It can be monstrously disfiguring. It can be potentially redemptive."

Songs Of God And Whiskey