Tv on the Radio 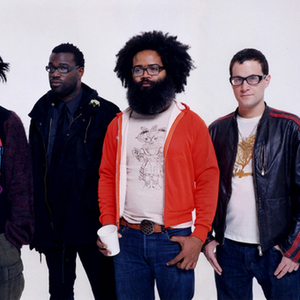 TV on the Radio is a Brooklyn, New York, USA-based band that was formed in 2001. Their music is difficult to classify and is often described as art rock or post-punk, but is educated by a diverse spectrum of styles including freeform jazz and a cappella music, psychedelia and trip-hop, modern soul and classic '90s indie rock, giving them a unique and original sound. The core members are Tunde Adebimpe (vocals, loops), David Andrew Sitek (guitars, keyboards, loops) and Kyp Malone (vocals, guitars, loops), but the band is accompanied by additional members when performing live.

On record, they've been joined by Jaleel Bunton (drums) and Gerard Smith (bass) (both of whom have recently become permanent members), Martin Perna (flute, saxophones) and Nick Zinner of the Yeah Yeah Yeahs (guitar). Celebration's Katrina Ford and Blonde Redhead's Kazu Makino have both made vocal contributions to various TVotR tracks and even art rock legend David Bowie (an early advocate and advisor of the band) has a vocal cameo on 2006's Return To Cookie Mountain.

Their first album was the self-released OK Calculator (the title being a reference to Radiohead's seminal album OK Computer), the majority of which is wildly different from their later sound, with elements of electro, hip-hop and turntablism. Later they were joined by Kyp Malone and released Young Liars (EP) and Desperate Youth, Blood Thirsty Babes (LP) to great critical acclaim, the latter earning them a Shortlist Music Prize. They have since released a second EP, New Health Rock which contains a new track, New Health Rock; a cover of Modern Romance and The Wrong Way, a track formerly available on Desperate Youth, Blood Thirsty Babes.

In February 2006, TV on the Radio signed to Interscope Records in the USA, leaving their longtime label, Touch & Go. They are signed to legendary English label 4AD in the UK and Europe. Their highly-anticipated album Return To Cookie Mountain was released in September 2006.

In September 2008, the fourth album, Dear Science was released to great critical success, earning the honor of album of the year from Spin Magazine, Rolling Stone, and Entertainment Weekly. The band embarked on a tour in its support.