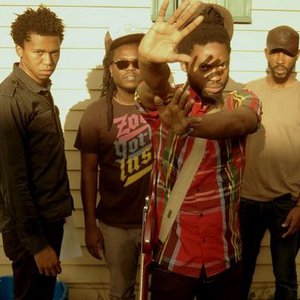 The BLK JKS, South African afro avant noise rock band. Childhood friends Linda and Mpumi grew up on the same block in Johannesburg's East Rand, where they taught themselves guitar after Linda's sister received one as a prize in church choir. Forming a band in 2003, early BLK JKS shows and recordings were remarkable for their stacks of guitar drone and head nodding beats, but it was with the addition of bassist Molefi and drummer Tsepang?both of Soweto?that BLK JKS began work with a fresh approach and plunged into its current universe of sound.

Heavy club dates and festival gigs followed as they band earned a loyal following across the country. In June 2007 the BLK JKS released a handful of songs as a limited edition CD EP that was quickly snapped up by hardcore fans and knowing collectors. The November 2007 release of the ?Lakeside? vinyl-only 10 in marks the band's international debut with a limited edition of 500 selling at some of the world's best record shops: Rough Trade (London), Soul Jazz (London), Phonica (London), Rush Hour (Amsterdam), Turntable Lab (NYC), Other Music (NYC), Dusty Groove (Chicago), Jet Set (Kyoto/Tokyo), Canned Applause (Johannesburg) and Mabu (Cape Town).

BLK JKS have finished their debut LP ?After Robots" available for pre-order now from Secretly Canadian. The album is available with the Mystery EP as a double album.