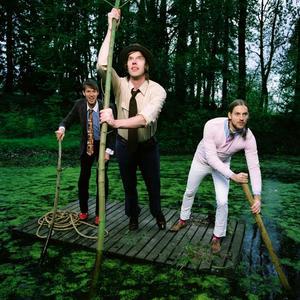 Menomena are an experimental rock band from Portland, Oregon, made up of Danny Seim on percussion; and Justin Harris on bass, guitar, and saxophone. Both members of the band share singing duties and swap instruments frequently while recording. The band formed in late 2000, when ex-member Brent Knopf graduated from Dartmouth College and returned to Portland to collaborate with Harris and Seim. They played their first show in July 2001, at The Meow Meow, a now-defunct all ages venue in Portland.

The band formed in late 2000, when ex-member Brent Knopf graduated from Dartmouth College and returned to Portland to collaborate with Harris and Seim. They played their first show in July 2001, at The Meow Meow, a now-defunct all ages venue in Portland.

Menomena self-released their debut album, I Am the Fun Blame Monster!, on May 20, 2003. The album was elaborately packaged in an 80-page flipbook that Seim designed and individually hand-assembled. It later received nationwide distribution through FILMguerrero in 2004. The title is an anagram for The First Menomena Album.

In 2005, Under an Hour was released as a three-track album of instrumental music written for and performed with Monster Squad, an experimental dance company based in Portland.

In August of 2006, Menomena signed with Barsuk Records although the band still maintains a relationship with their old label, FILMguerrero. It was stated that FILMguerrero would still be involved in their old catalog and future vinyl releases.

Menomena released their next album in 2007, titled Friend and Foe. It received relative critical acclaim -- while some websites like Pitchfork Media praised the album for its effective modular pop, others like PopMatters criticized it for presenting a sense of feigned maturity. Their record release show was held in their home town of Portland, Oregon. The packaging features artwork by graphic novelist/cartoonist Craig Thompson, consisting of die-cut shapes, decoder rings, and hidden messages. It was nominated for "Best Recording Package" at The Grammy Awards.

The band's following album, Mines, was released in July 2010.

In January 2011, Brent Knopf's departure was announced. He left the band under good terms in order to focus on his other project Ramona Falls.

Without Knopf, Menomena released their most recent album, Moms in September of 2012.

The band's name was chosen for "the way it rolls off the tongue, sexually, or something" and has no specific meaning, although it is often assumed to refer to the Piero Umiliani song "Mah N? Mah N?", a staple of The Muppet Show.

Danny Seim also has a side project began in the late 90's titled Lackthereof.

Under an Hour (EP)

I Am The Fun Blame Monster! B-Sides!

I Am The Fun Blame Monster!