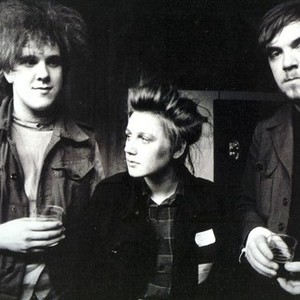 Cocteau Twins were an innovative and influential Scottish dream pop band. Forming in 1979 in Grangemouth, Scotland, UK (the name taken from an obscure song by fellow Scots Simple Minds), they built a sound based on woozy atmospherics and singer Elizabeth Fraser's unmatchable vocals, most of which featured lyrics of made-up words and words plucked at random from the dictionary. Their first release was "Garlands" in 1982 on 4AD Records, which was received well. Founding member Will Heggie left the group in 1983 and soon joined fellow Grangemouth band LowLife.

Their first release was "Garlands" in 1982 on 4AD Records, which was received well. Founding member Will Heggie left the group in 1983 and soon joined fellow Grangemouth band LowLife. The band's second full-length, "Head Over Heels", did enjoy more commercial and critical success than their first.

In 1983, the two remaining members, Fraser and Robin Guthrie, were part of the first album recorded by This Mortal Coil, a supergroup put together by Ivo Watts-Russell, head of 4AD Records. The pair had a hit with a cover of Tim Buckley's "Song to the Siren", and met Simon Raymonde, who joined the band on bass.

In April 1984 they released "Pearly-Dewdrops' Drops", the 12-inch that included "The Spangle Maker". It was their first to reach the national top 40. When it peaked at 29 they were asked to play Top of the Pops, but turned it down.

A musical sidestep was to follow, as the Twins recorded a collaborative effort with minimalist composer Harold Budd, "The Moon And The Melodies" in 1985, and then a year later their next album, "Victorialand", was recorded without Raymonde (who was working on the second This Mortal Coil album) or drums. The resulting album is possibly the most ambient of all their releases. "Victorialand" hit the UK album chart top 10, their biggest hit to date. Following this, Raymonde returned and they recorded "Blue Bell Knoll", which was released in 1988 and was described by some critics as 'the voice of god'.

1990's "Heaven or Las Vegas" was possibly the most accessible album of their career, featuring fuller arrangements, for the first time Fraser singing recognizable lyrics (a few), and even what could be called a hit single, "Iceblink Luck". "Iceblink Luck" was another top 40 hit single, and "Heaven or Las Vegas" charted at number 7, becoming their biggest hit to date. Following this, two more albums were released, "Four-Calendar Cafe" in 1993 and "Milk and Kisses" in 1996; both charted inside the top 20. The band split up in 1997 following the breakup of Liz Fraser and Robin Guthrie.

As with many 4AD bands, Cocteau Twins released many 12" singles and EPs, often featuring additional tracks not available on the full-length albums (yet complementary to them). In 2006, these were released as a 4-CD boxed set "Lullabies To Violaine", later made available as two double-CD compilations.