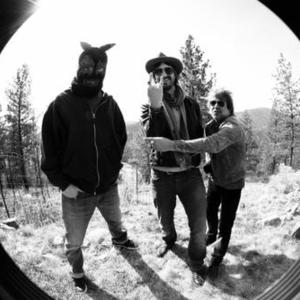 RNDM is Jeff Ament of Pearl Jam, Joseph Arthur and Richard Stuverud. The chance encounters of everyday life shape us in more ways than we can imagine. From them spring unexpected opportunities, exciting new directions, burgeoning friendships and, quite often, great music. Such as is the case with ?Acts,? the debut album from RNDM, featuring Pearl Jam bassist Jeff Ament, songwriter Joseph Arthur and drummer Richard Stuverud.

The chance encounters of everyday life shape us in more ways than we can imagine. From them spring unexpected opportunities, exciting new directions, burgeoning friendships and, quite often, great music.

Such as is the case with ?Acts,? the debut album from RNDM, featuring Pearl Jam bassist Jeff Ament, songwriter Joseph Arthur and drummer Richard Stuverud. As the project's moniker alludes to, Ament and Arthur met randomly on a June evening in 1999, when Arthur opened a show at the late, great New York club Wetlands on a bill headlined by Ament and Stuverud's side project Three Fish. At the time, Arthur was drawing acclaim for his solo performances, which employed a looping pedal that made the artist sound as if he was being backed by a full band.

?I'd seen people mess with a looper a little bit, but I'd never seen anybody do what Joe was doing at that time,? Ament recalls. ?He made it all so seamless.? Says Arthur, ?I remember meeting Jeff and being nervous to talk to him. It's always nerve-wracking to meet someone in a band that big. But on the other hand, I met a girl there that night that I ended going out with for five years.?

The pair stayed in touch via email over the ensuing years, and reconnected in 2010 after Arthur played a KEXP-sponsored lunchtime gig in Seattle. Ament extended Arthur an invitation to come to his Montana home to jam, but before they could make plans, a song emerged unexpectedly.

?As I was finishing up my last little group of solo songs, there was one called ?When the Fire Comes' that just wasn't working for me vocally,? Ament says. ?I kept hearing his voice instead of mine. I sent Joe an email gauging his interest, and two days later, I got the track back from him. At that point, I knew there was something there ? some sort of creative connection.?

Ament and Arthur performed ?When the Fire Comes? together at Pearl Jam's 20th anniversary blowout concert last summer at Alpine Valley in Wisconsin. A studio version of the song was released as a CD single to commemorate the special event, as well as on Ament's latest solo album, ?While My Heart Beats.?

Which brings us to ?Acts,? and the jam session that would eventually birth it. Says Ament, ?After PJ 20, Joe told me he'd never really been able to write up-tempo songs, and I said, ?I have a slew of them. Let's get together and make an up-tempo record.'? Thus, in April of this year, Arthur finally joined Ament and Stuverud in Montana thinking he'd just be singing over the top of instrumental tracks that had already been completed.

Instead, ?I'd told Richard, but not Joe, that I just wanted to be Joe's band for the first day or two, to see how it went,? Ament says. After some initial jamming on the first night in the studio, Arthur volunteered a song of his called ?What You Can't Control? that the trio bashed into shape within an hour, and RNDM was off and running. Later, Ament delved into his work tapes to find riffs and instrumentals that would form the basis for other new songs.

Things clicked so easily that the trio were half-jokingly discussing touring, designing t-shirts and making costumes within hours of pressing the record button. ?We had six tunes after that first night and day. Everybody was just buzzed,? Ament says. ?Jeff and Richard have been playing together so long and they have such a great chemistry,? Arthur adds. ?To hear the songs filtered through that rock and roll style was really awesome.?

After four days with longtime Pearl Jam engineer Brett Eliason behind the boards, the group had nearly 20 finished tracks, which have been whittled down to 12 for the album ?Acts.? Throughout, the songs crackle with a plug-and-play spontaneity. Pearl Jam fans will surely note Ament's distinctive bass work on concise blasts of rock'n'roll like ?Letting Go Of Will,? ?Throw You To The Pack? and ?Look Out,? while the trio stretches its musical muscles on blissed-out jams like ?Hollow Girl? and the soulful, wah-wah guitar-tinged ?Williamsburg.?

Elsewhere, the acoustic, harmonica-tinged ?Cherries in the Snow? highlights Arthur's knack for simple, effective songwriting, while the rumbling mid-tempo rocker ?Darkness? and the hard-charging opener ?Modern Times,? driven by a power-pop Stuverud beat, showcase how the hybrid styles of the three musicians blend together so smoothly.

?Joe's instincts, just based on the way he plays by himself, are to layer things, especially his voice,? Ament says. ?And I kept saying, ?No, man! We're a power trio! It's OK if all you hear during a guitar solo is bass and drums.' I've always been in bands with two guitars, so I've always wanted to be in a power trio where you can hear that space behind the voice.?

?All of the songs I contributed to the album existed in some recorded form, but they were stuck in the ?backlog,'? Arthur says. ?To give them a fresh treatment and produce them in a way that almost veers into underproduction was very uplifting.?

With ?Acts? now ready for release, RNDM is preparing to hit the road for its first tour, while still savoring the rush of creativity that birthed the album. ?It felt like those first bands you're in, where the first few weeks you ate and slept and breathed the music that you were working on,? Ament says. ?All you did was hum those songs until you got to the next practice. I was completely open to whatever was going to happen, and I know Joseph was too.?

House producer RNDM is Oliver Kargl, a companion of Hamburg's "dial" Imprint, respectively its sublabel "Laid" issuing vinyl resleases only.
Krargl is also the second head of the moody house duo Pigon besides Philip Sollmann who is better known as Efdemin.