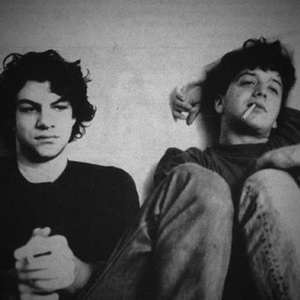 Ween was an experimental rock group formed in 1984 in New Hope, Pennsylvania, United States when Aaron Freeman (Gene Ween) and Mickey Melchiondo (Dean Ween) met in an eighth grade typing class. Ween collected a large underground fanbase despite being generally unknown in mainstream music circles aside from their 1992 fluke hit ?Push Th' Little Daisies?. The band's style is eclectic, and while they could generally be referred to as rock, one of their defining tendencies has been experimentation with various styles incorporating a strong element of humor and absurdity.

The band's style is eclectic, and while they could generally be referred to as rock, one of their defining tendencies has been experimentation with various styles incorporating a strong element of humor and absurdity. Both Gene and Dean are skilled multi-instrumentalists who overdubbed various instruments on their recordings, though they also record with the regular touring band.

Their earliest home recordings were anarchic and free-spirited, drawing on influences as far-reaching as Beatles, Queen, Prince, Butthole Surfers, The Residents and the lo-fi punk movement. Ween was often compared in their early years to other offbeat artists such as Frank Zappa and would always eschew such comparisons.

Ween was signed to Twin/Tone Records in 1989 and released their first album GodWeenSatan: The Oneness in the following year, a 26-track smorgasbord of wild eclecticism. 1991's The Pod became a fast fan favorite, as the duo's use of drum machines, pitch-tweaked guitars & vocals and drug-laced humor became a trademark part of their sound. The Pod, according to Ween-lore, was written under the influence of Scotchgard, but this was later refuted by Gene and Dean themselves as being "the most slime-bag thing we could think of." The contraption on the album cover is not a Scotchgard inhalation device, but a bong-like device used to send marijuana directly to the brain by use of nitrous oxide, which was said to leave the user intoxicated for days, but nauseated. The cover of The Pod used the cover of the 1975 Leonard Cohen album, The Best of Leonard Cohen, but with the head of Mean Ween (sometime bassist Mark Kramer) wearing the mask, pasted onto that of Cohen.

Pure Guava, the first of a series of releases on the Elektra label, featured their highest charting single, "Push Th' Little Daisies" (1992) which gained them media & MTV attention, as the video was a highlighted target on MTV's Beavis & Butt-head. Chocolate and Cheese followed in 1994, heralding 70s pop/rock & soul sendups such as "Freedom of '76" and "Voodoo Lady". The "Freedom of '76" music video was directed by Spike Jonze. At this time, Ween began to expand their live and studio line-up, providing both a crisper production sound in the studio and an easier live setup (up until this time, Ween had been using DAT tapes to provide backings for their songs).

Ween turned to Nashville studio musicians for the recording of the authentically-spirited 12 Golden Country Greats (1996) which only contained ten tracks. There are two theories regarding the title of the album. The first is that it refers to the dozen veteran Nashville studio musicians who played on the album. The second is that the band did indeed record twelve songs during the demo sessions for the album, but upon the removal of the tracks "I Got No Darkside" and "So Long, Jerry" (the latter of which was a B-side on the "Piss Up A Rope" single) they decided not to rename it.

The nautically-themed The Mollusk followed in 1997, demonstrating Ween's satirization, deconstruction, and appreciative mastery of genres including 1960's Brit-pop, sea shanties, Broadway show tunes, and especially progressive rock. Their desire to pursue alternate forms of media led to the MP3-only release Craters of the Sac (1999), presented by Dean for online download and free trade. Elektra Records released a live compilation entitled Paintin' The Town Brown: Ween Live 1990-1998 in 1999, followed by White Pepper (2000), their pop-themed album and final studio set for Elektra. The track "Even If You Don't" was made into a music video directed by the creators of South Park, Trey Parker and Matt Stone. Shortly after White Pepper Ween started the internet radiostation WeenRadio, which was awarded 3rd best internet music site by Rolling Stone.[1]

Ween also formed their own label at this time, Chocodog Records, which oversaw the release of several self-produced live sets. The aforementioned Paintin' the Town Brown, which was compiled and mastered by the band, was meant to be the first Chocodog release. According to Dean Ween, once the album was completed, Elektra realized the sales potential of the CD and denied Ween the right to release it through Chocodog. Later, Ween released the first official Chocodog album, Live in Toronto (a live recording from the 1996 tour, in which Ween performed with Bobby Ogdin & The Shit Creek Boys). The limited-pressing CD, available exclusively through the band website, became an instant collector's item. Subsequent Chocodog releases (Live at Stubb's and All Request Live) were produced in higher volumes to meet demand. In 2005, the label released the first instalment of a rarity compilation series entitled Shinola, and announced plans to re-release the 1987 cassette tape by Gene, Synthetic Socks.

The two signed to Sanctuary Records in 2003 and released Quebec, their first studio set in 3 years. In 2004, they released Live in Chicago, a DVD and CD set that compiled tracks from three energetic live performances.

In February of 2006, they rented an old farmhouse and converted it into a working studio. After writing over 50 songs and recording rough versions through 2006, they picked through them, and, with Andrew Weiss as producer, re-recorded album versions. As of March 2007, they are recording final versions of what they have said to be about 20 songs. On May 22, 2007 they announced they will be releasing an EP entitled "The Friends EP" on June 8th. Dean Ween said the EP will be "The ultimate party record, filled with good beats and good times. Perfect for your barbecue or doing bong hits or whatever it is that you guys do." And also they announced the new album--entitled "La Cucaracha"-- was released October 23, 2007 on Rounder Records, placing them on the same label as fellow Alternative Rock duo They Might Be Giants.

Ween came to an end in May of 2012 when Freeman announced the band had split to Rolling Stone Magazine.


Members at time of break up: