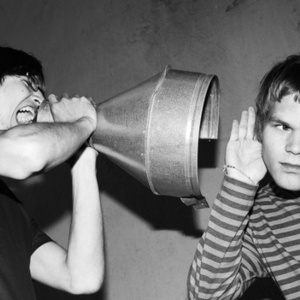 Goodnight Monsters were founded in 2004 in Turku, Finland by Matti Jasu and Valtteri Virtanen. The debut album "The Brain That Wouldn't Die" was recorded the same summer and released in 2005 by Bone Voyage Recording Company. Nowadays the band also includes Markus Jalonen. Jussi Rantanen and Juha Kiskonen are taking care of the drumming activities. And there's always Kece! Here's a review from allmusic.

om by Tim Sendra to descripe our music (what a nice review!) "Listening to Finland's Goodnight Monsters is like eating cotton candy with a root beer float chaser. Pure sugar rush from start to finish. Their debut album The Brain That Wouldn't Die is loaded with lightweight, hooky tunes that don't have a single ounce of seriousness or reality to be found anywhere. If you are looking for either of those things, you'll probably want to break something after hearing the record. Don't stress though, you can find seriousness and reality pretty much anywhere you turn these days. Finding a group who would rather be goofy (with killer melodies, no less) is much more difficult. Finding a group who can pull off being silly without being stupid, child-like without being childish, that is harder still. These guys pull it off three ways: memorable and almost painfully melodic tunes, the occasional mid-tempo ballad that comes close to having some kind of content ("Back Porch," "Big Jet"), surprises like the 9 minute long rocker Demonstrator" which shows the band could play for real if they wanted to. At their best Goodnight Monsters capture the spirit of 1986 as typified by the BMX Bandits, have the feel of 1968 bubblegum groups like the 1910 Fruitgum Orchestra and bop with timelessly youthful simplicity of Jonathan Richman. A fine debut from a band you have to hope never grows up."