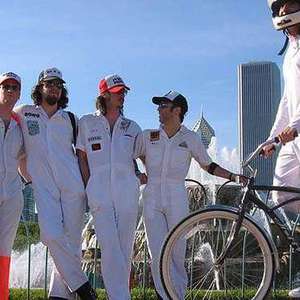 Hailing originally from Ann Arbor Michigan, the band Ghettobillies have seen and done it all. Reverend C. Cobb (AKA: Robbie Conaway) and Pope D' Licious (AKA: Derek Kramer) moved to Chicago to seek out better opportunities for their band. From working the mean streets of Chicago as bike messengers to working the old, bitchy women of advertising on Lasalle street with massage oil, the GB's have earned their rightful place as a band that has stood the test of time.

Except perhaps for a brief stint in Bogota Columbia where one of them worked as a gun runner for Juan Garcia Abrego (an infamous South American drug cartel who smuggled some of the largest shipments of pure Columbian snow into North America), touring nonstop over the past 6 years has brought this band to a skill level and maturity rarely seen on the local level anymore. Once the 5th and final drummer, Holy Maloney (AKA: John Maloney), joined the not so well known supergroup back in 2002 and rythm section "life partner" and child prodigy bassist Bong (AKA: Matthew Longbons) jumped on the preverbial bandwagon, the circle of ridiculousness was complete. Masters in each of their chosen fields, the band Ghettobillies knew no musical boundaries and in the words of one famous writer from Rolling Stone magazine, "...Those guys play whatever the hell they want!...It's ridiculous."

Since that time, the band Ghettobillies have tirelessly toured all over the midwest, east coast and United Kingdom and succeeded in creating their own enormous underground cult following without the help of any record labels, supergroup managers, well known promoters, or really anyone actually legitimately involved in the music industry at all. Though they have always sought out the help of said agencies and companies, they have mostly been ignored by every major and independent record label that exists from time immortal and most likely will continue to be. But "why?" you might ask-

Why do these men of genius not receive what seems to be so rightfully theirs? Why is the world so unfair to men who work so hard and deliver so much to so many?

Still in the Pink