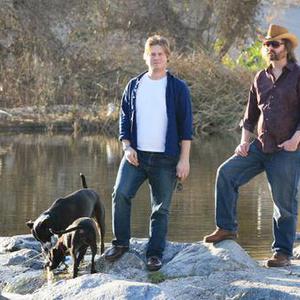 The combination of Heidecker's strange mix of dry humor and sincerity with Wood's spot-on ability to create authentically nostalgic sounding tracks creates a simultaneously puzzling and delightful listening experience; one that deserves multiple spins and is bound to result in spontaneous shower serenades.

It all began one night at Heidecker's house where Wood found himself working with Heidecker on a song for ?Awesome Show.? They had crafted a tune that wasn't quite right for the show ? it sounded more like something The Band would have played, silly lyrics aside. From there, Heidecker & Wood began improvising around a chorused out Fender Rhodes and lyrics about the ?prince and the pauper.? Tim sang in a super relaxed Gordon Lightfoot-baritone while Davin floated around the keys as if stoned on ?ludes left over from ?74. After goofing around for a bit, they locked in and proceeded to lay down the basic tracks for ?Weatherman? that night.

From there, Heidecker & Wood would intermittently schedule a meeting at Tim's where they would write a song -- usually based on a rough sketch or a kind of song they were aiming for -- and record the basic tracks. Davin would then take the track back to his lair and add layer upon layer of smooth magic. Over time, songs and tracks began to pile up. Eventually this little hobby started to seem to Tim and Davin like it might just be more than a little hobby. It may be worth a release. Friends were encouraging and pushed Tim and Davin to finish what they started. But to be true to the style they were going for things had to sound just right. So Tim brought on Pierre de Reeder (Rilo Kiley) to mix the record, who then suggested bringing in session drummer Jason Boesel to replace Davin's midi drums which were ?oh so close?, but missing the organic feel of a real human being. Pierre took what began in a bedroom office and a laptop and turned it into something that sounds like it came out of a Sunset Blvd studio.

So there you have it. Call it whatever you like: Vanity project? Sure. Novelty record? Why not? Our only hope is that you won't be able to get these songs out of your head and that one day you'll be caught singing out loud to yourself ?you better be fighting what's right in the world,? and wonder ?what the f**k does THAT mean?"

Some Things Never Stay The Sam