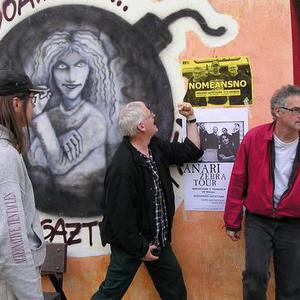 NoMeansNo are a band originally from Victoria, British Columbia, Canada and now located in Vancouver, British Columbia. The band have never had, or have ever seemed to pursue, strong mainstream success, but they do have a devoted underground following in North America and Europe. They tour fairly often on both continents and maintain a dedicated fan base. The band was formed in 1979 by brothers Rob Wright (bass guitar and vocals) and John Wright (drum set, keyboards and vocals). Their name derives from an anti-date rape slogan.

The band have never had, or have ever seemed to pursue, strong mainstream success, but they do have a devoted underground following in North America and Europe. They tour fairly often on both continents and maintain a dedicated fan base.

The band was formed in 1979 by brothers Rob Wright (bass guitar and vocals) and John Wright (drum set, keyboards and vocals). Their name derives from an anti-date rape slogan. For their first four years the duo's music would seem to be influenced as much by jazz and progressive rock as punk rock. The musical press described their earliest recordings as "Devo on a jazz trip, Mot&ouml;rhead after art school, or Wire on psychotic steroids." NoMeansNo have been credited with being an influence on, and perhaps even the genesis of, math rock.

The brothers Wright began recording as a two-piece in their parents' basement in 1979. These recordings, heard on their first two self-released 7"s, consisted of full rock band arrangements and had a new wave, warped-pop sound, different from subsequent recordings. When, in the early 1980s, the duo began gigging simply with bass, drums and vocals, the present form of their distinct sound slowly took shape. The songs they played in this period are documented on the "Mama" LP (re-released in 2004 on their own Wrong Records.)

In 1984, they added Andy Kerr (who played with John Wright in Infamous Scientists) on guitar and vocals. Kerr preferred pseudonymity and used such pseudonyms as "Buttercup" or "None-Of-Your-Fucking-Business". He brought a distinct hardcore punk edge to the group, and stayed until 1991. He is often erroneously credited for penning the lyrics of NoMeansNo songs on which he sang, perhaps due to deliberately vague liner notes and frequent vocal moonlighting (Kerr sings lead or co-lead vocals on nearly half the songs on Wrong for example). Kerr's vocals were a necessity for a period of time in the 1980s when Rob Wright was recovering from nodules on his vocal cords. While Rob Wright is the band's lyricist and main songwriter, all members have contributed songs to NoMeansNo records, and nearly all their material is credited to the entire band.

Wrong is widely considered the band's best and most representative record ("The playing is incredibly skilled, with the Wright brothers effortlessly shifting tempos and time signatures and Kerr's razor sharp lyrics clicking right into place").

After Kerr's departure, the Wright brothers recorded "Why Do They Call Me Mr. Happy?" as a duo. They subsequently recruited guitarist Tom Holliston from Showbusiness Giants and The Hanson Brothers, and have continued touring and releasing records, including "Worldhood of the World (as such)", "Dance of the Headless Bourgeoisie", "One", and most recently, "All Roads Lead to Ausfahrt" which was released on August 22, 2006. The album was released by AntAcidAudio in the United States and Southern Records in Europe.

The album "One", released in 2000, featured "two stunning covers that only make sense coming from NoMeansNo": a slow stoner rock-styled version of The Ramones' Beat On The Brat, and rather authentic fifteen-minute version of Miles Davis' Bitches Brew, (complete with electric piano and congas) featuring lyrics by Rob.

NoMeansNo initially released records with seminal punk rock record label Alternative Tentacles. This relationship ended in 2002. The band has since been reissuing old albums through Southern Records under their own Wrong Records imprint.

Even their earliest recordings demonstrate impressive instrumental technique ("some of the most complex instrumentation you're ever likely to find in punk rock"). Jazz has been an influence on the group; Rob's basslines have a loping, melodic quality often reminiscent of Charles Mingus, and John's drumming sometimes sounds a bit like Elvin Jones or Art Blakey.

NoMeansNo's output features a seemingly endless flow of "Wright/wrong/right" puns, and significant measures of black humour, with "pointedly warped lyrics", such as on "Dad" from Sex Mad. The song was a minor college radio hit, and has been called "a bit chilling, even though it's spit out at slam-pit's pace". The first person narrator details a rampaging father's physical and sexual abuse, ending with what's been called a "killer end touch?the baldly delivered line 'I'm seriously considering leaving home.'". One critic (while noting the group's "savage intelligence") suggests that NoMeansNo might well be "the secret influence on a fair amount of both early-'90s math rock and emo, what with the barely controlled fervour of the singing and the sudden jerks back and forth in the rhythm section."

Equally striking about the band's back catalogue is their ability to jump from style to style and still maintain their musical identity. They leap from dirge to thrash, complication to simplicity, discordant to melodic and still sound like themselves.

John's drumming style has been mentioned as an influence to others, including Dave Grohl.

Rob Wright's alter ego is Mr. Wrong, who dresses as an authoritarian priest and often poses with a shotgun. Mr. Wrong is simply Wright on bass and vocals with no other instrumentation. It is rumoured that Wright also plays upright bass in a traditional jazz band who play standards, but he keeps this side of his life fuzzy in interviews.

Andy Kerr and John Wright played in the early 1980s in the Infamous Scientists. Kerr, after leaving NoMeansNo, released a solo CD and collaborated with Victoria musician Scott Henderson in Hissanol. Kerr most recently has begun a duo called Two Pin Din in the Netherlands.

All Roads Lead To Ausfahrt

Dance Of The Headless Bourgeoisie

Would We Be Alive?

The Worldhood of the World (as such)

Why Do They Call Me Mr. Happy?