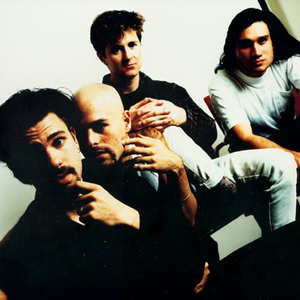 Shudder to Think was an American rock group. Formed in 1986, they released three albums on the Washington, D.C. Dischord Records label and have been labelled a post-hardcore band, but actually draw upon a wide range of stylistic influences, including pop. Their music is characterized by a complex mix of these stylistic influences, as well as by technical precision and melodic virtousity. The band's first lineup was Craig Wedren (vocals and guitar), Chris Matthews (guitar), Stuart Hill (bass) and Mike Russell (drums).

The band's first lineup was Craig Wedren (vocals and guitar), Chris Matthews (guitar), Stuart Hill (bass) and Mike Russell (drums). In this incarnation, the band released two singles and one album (Curse, Spells, Voodoo, Mooses, 1989) before being signed by the Dischord label. Three albums were then released (Ten-Spot, 1990, Funeral at the Movies, 1991, and Get Your Goat, 1992), before the band gained greater exposure by touring with Fugazi and The Smashing Pumpkins.

Nathan Larson (guitars) and drummer Adam Wade replaced Matthews and Russell in 1994, immediately prior to a major-label contract with Epic with whom Pony Express Record was released in 1994. The album's angular, mathematical post-modernism earned it an intense cult-like following, marking the record as one of the most original punk albums to ever be released on a major label.

Over the next few years, Wedren successfully battled Hodgkin's Disease, Larson recorded an album with side project band Mind Science of the Mind and Wade left the group. His replacement was Kevin March, formerly drummer with Dambuilders.

Another album, 50,000 B.C. was released in 1997. The band also worked on music for soundtracks including First Love, Last Rites and High Art.

1998, the same year in which the band appeared on several tracks for the film Velvet Goldmine, saw Larson's departure and the subsequent demise of the group, which split that year. Wedren pursued a solo career, including an appearance on the Down to You soundtrack with Didn't Mean to Do You Harm, and contributed backing vocals to Verve pipe's 1999 eponymous album.

Both Larson and Wedren have gone on to create highly-regarded film-music. Wedren also makes solo music, and has recently released his debut album, "Lapland", in 2005. Larson has formed a new band called Hot One.

Funeral at the Movies