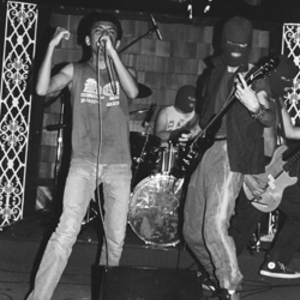 Fearless Iranians from Hell were a thrash punk band formed in 1983, in San Antonio, Texas. According to the band members, their lyrics praising and inciting Islamic extremism and anti-America sentiment were a mockery of American attitudes towards Iran, and how the Iranian population as whole had been demonized by the country. Combining their sarcastic criticism and the developing genre of thrash, they quickly became infamous in San Antonio, and many stories abound.

Their original lead singer was Amir Mamori, an American Iranian, but had another singer for some time named Matt, a white skinhead. Members of FIFH have been associated with other similar San Antonio groups, including Butthole Surfers.

Their self-titled debut EP was released in 1986. After the release, they followed up in 1987 with Die for Allah, then after with 1988's Holy War. In 1990, they released their final full length album, Foolish Americans, before a presumable split up. Their last release was a compilation, of previous tracks from their earlier albums, titled Foolish Americans/Holy War/Die for Allah.