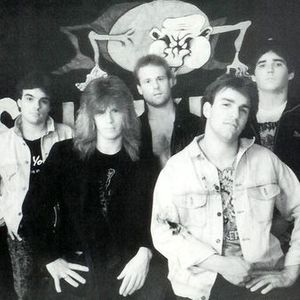 Crumbsuckers was a 1980s hardcore band that formed in 1982 on Long Island by bass player Gary Meskil in their home town of Baldwin. In June 1983, the band recorded a demo unofficially called "The Crumbsucker Cave" at Nino Studio in Baldwin with five songs, including a cover of Chubby Checker's "The Twist".It was with this demo that they landed their first CBGBs showcase, and subsequent Hardcore Matinees.

At the time, the line up was boiled down to Dave Brady (v), Dave Wynn (g), Gary Meskil (b) and Kevin "Toast" Carroll (d). From the time of their first matinee performance, they prided themselves on all original music, with the occasional homage to the classics, such as Black Sabbath's "Sweet Leaf" and the theme from "Inspector Gadget".

In early 1985 looking for a newer edge, they added Chuck Lenihan as a second guitarist, and (then) 16 year old Dan Richardson on drums. Lyric and music direction took a notable turn towards a more metal edge with songs such as "Life of Dreams" and "Return to the Womb" written at this time.

The combined styles of Meskil's roots in punk and east coast hardcore, coupled with Wynn's classic and hard rock styles, and Lenihan's dive-bomb solos soon earned them respect among the CBGBs matinee crowd. In that same year, they recorded a second demo at CBGB's with the new five piece line up, and began searching for a record deal. It was during this time that vocalist Dave Brady left the band, due to differences in the bands musical direction, and his own taste in extracurricular chemical indulgences.

They were one of the first to mix the two genres, hardcore ethos, and heavy metal pathos, in their debut album Life Of Dreams. The songs were written by Gary Meskil, Dave Wynn, Chuck Lenihan, Dave Brady over the course of their formative years, 1983-1985.
Only two songs featured lyrics by new vocalist Chris Notaro.

Notaro, known for his gruff, almost incomprehensible vocals and high-energy stage antics, was a founding member of the Long Island band Krakdown, contemporaries of the already well established Crumbsuckers. So getting Notaro on board was a natural fit, in keeping the Long Island vibe alive.

The Crumbsuckers were at the forefront of the hardcore and metal crossover movement with bands such as Agnostic Front, The Cro-Mags, and D.R.I., some might even argue they were the trailblazers.

In the spring of 1987, guitarist Dave Wynn left the band and after a few guitarists came and went, Robbie Koebler stepped in to record Beast On My Back (coincidentally the acronym "B.O.M.B." was also attached to this opus). One highnote of this recording was the guitar-driven track, "Initial Shock" penned by Matt Cardin shortly after Wynn's departure, a fellow Baldwin naitive and well regarded guitarist, though no credit was ever given.

Some felt that the band was overlooked by mainstream fans because of the limited appeal of this particular genre of music at the time, as well as the dramatic shift in lyrical content between the two albums. Others will argue that they were merely a product of the times, and at the dawning of a new decade, this musical style had run its course.

In 1989, the band finally broke up due to musical differences and disagreements as to which direction the band should go.

It wasn't until some of the surviving members formed the band Pro-Pain, that all was once again righted..

The "band" reunited on August 3, 2006 in New York City to commemorate the 20th anniversary of the album Life of Dreams with a special appearance by founding members Wynn and Brady on the classic track "Hub Run".

Beast On My Back