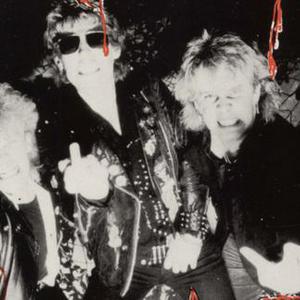 The British heavy metal band Warfare was formed in the early 80's. Their debut album "Pure Filth" was released in 1984 and produced by Tank's Algy Ward who also guested on the album together with Venom members. Their 1986 album "Metal Anarchy" was produced by Mot?rhead's own Lemmy and also features guitar contributions from Wurzel of Mot?rhead. Their next album "Mayhem, Fuckin' Mayhem" was procuded by Venom vocalist Cronos and sold over 40000 copies. Next came "A Conflict Of Hatred" with guest appearances from Mantas of Venom, Lindisfarne's Marti Craggs and former Prelude vocalist Irene Hume. In 1989 the band left their hometowm label Neat Records and instead signed with Hammer Film Music and released the album "Hammer Horror". Because of lack of promotion the band re-recorded this album with Algy Ward on guitars in several tracks and released the new version on Silver Screen Records. The second version also featured a classical piece co-written with former Tygers Of Pan Tang guitarist Fred Purser which was later used as part of the soundtrack to the movie "Vlad The Impaler". The band now started to dissolve and in mid 1993 the band leader Evo was involved with the project band Warhead together with Mot?rhead guitarist Wurzel and Tank bassist Algy Ward.

A Decade Of Decibels

A Conflict Of Hatred