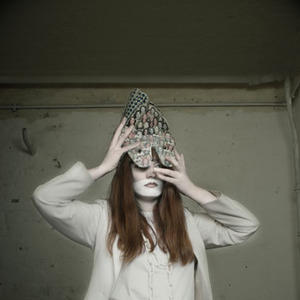 Planningtorock (all one word, often just PTR) is the vehicle of expression of Janine Rostron , a musician and visual artist from Bolton, Manchester, UK who has lived in Berlin for ten years. "W" is her new album, the follow-up to her 2006 debut "Have It All", which was a full-on chamber-pop romp that established Planningtorock as anything but orthodox. A ball of energy that landed as if by happy accident in the middle of the art, fashion and music worlds, Planningtorock allowed Janine to travel the globe performing at gig venues and arts events.

A ball of energy that landed as if by happy accident in the middle of the art, fashion and music worlds, Planningtorock allowed Janine to travel the globe performing at gig venues and arts events. She built a formidable reputation with a theatrical solo show in which she performed, wearing white and sometimes donning a customised PTR helmet, in front of the mesmeric videos she'd made for each track. Multimedia and sometimes kind of multi-gender, Planningtorock seemed to raise more questions than Janine had answers for, which tickled her. And through doing the live shows, she realised that her songs took on a second life, which in turn fed back into her music.

While she is a new name to many, those who know Planningtorock tend to form a strong emotional connection with her work. No doubt about it, Janine is totally out there on her own, and with W, she's raised the bar several notches, producing a powerful soul odyssey that ravishes the listener and comfortably ranks as one of the DFA label's finest releases.

Janine grew up near Bolton. Her darker humour comes from there. ?On the album I mess around with my voice a lot and I really enjoyed that,? she says. ?I'm really not precious about my voice. I do love powerful, beautiful voices but on a creative level you can do so much with your voice and I loved pulling it around on this record.

Janine composed the 12 songs that make up W over the last three and a half years, mainly recording in solitude in her Berlin studio. A gifted producer, she sings and plays everything ? keyboards, strings, guitar ? and mixed the record in Sweden at the end of 2010 during an intense session with Christoffer Berg.

One listen to W is all it takes to realise that Planningtorock is not tethered to the facts of Janine's everyday life or to any kind of authentic or so-called honest voice. Planningtorock is about ideas and fantasy and augmented reality. It's about sentiments and emotion and exploring the unknown. And with Janine at the helm, it will always be a fascinating voyage.

?W? will be released on May 16th via her own Label Rostron Records and DFA records.

Have It All Stringed Up