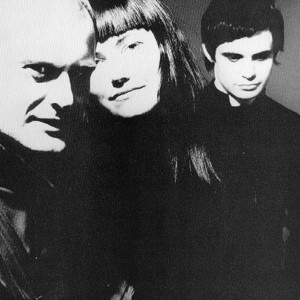 The three humans behind the suggestive sound barrage of UK band Add N To (X) - Barry 7, Ann Shenton, Andrew Aveling (1994-1996) & Steven Claydon (1997 - 2003) -- plugged in their equipment in 1993 with the intention of creating music that would be highly unconventional, profoundly evocative, and open to wild ideas. With what amounted to a political will to oppose dull and predictable use of machine as well as organic instruments, and a revulsion at the rise of coffee table electronic music, they were bound to be intriguing.

What they achieved in just over half a decade, however, demolished all expectations and built a purposefully deranged sonic edifice on top, visible from all corners of the planet.

They often utilized distinctive artwork for the videos and record sleeves, a fetishistic collage of sexual imagery with analogue electronic equipment.

The band's members were Ann Shenton, Steven Claydon, and Barry Smith. Shenton and Smith met in 1993, and discovered a shared affinity for vintage synthesizers. Original bandmate Andrew Aveling joined them for the group's debut release, Vero Electronics. Steven Claydon replaced Aveling sometime thereafter, and remained with the group until its dissolution.

Their second album On The Wires Of Our Nerves was recorded for Satellite records and released in 1998. After that the band signed to independent electronic label Mute Records and they issued the extreme bass analogue acid bath single 'Little Black Rocks In The Sun' on 10 inch hexagonal vinyl, playing a live show in a disused nuclear bunker to coincide. Six months of touring in America and Europe saw them turn into one of the most stimulating and unpredictable live bands. In 1999 they released 'Metal Fingers in My Body', the first single to be lifted from their powerful third album Avant Hard, soon followed by 'Revenge of the Black Regent'.

The group performed live regularly, often augmenting their core three-piece line up with either one or two acoustic drummers, and sometimes additional musicians playing extra synths and/or electric guitar. Shenton was reportedly overwhelmed by the pressures of the tour promoting their fifth and final album Loud Like Nature, and either left the group or was kicked out. In 2003 Smith and Claydon continued touring the United States without Shenton. The band broke up shortly thereafter.

Take Me To Your Leader (CDS)

Metal Fingers In My Body (CDS)

Little Black Rocks In The Sun

On The Wires Of Our Nerves